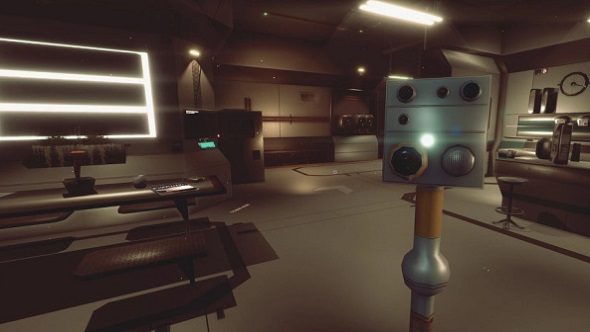 In a new trailer for their story-driven space sim HEVN, developer Miga have shown a typical problem players will have to solve while exploring a dilapidated mining base on the planetoid Naic. Mixing elements of survival games with narrative heavy experiences like System Shock, HEVN has players balancing their survival, with solving the mystery of this abandoned mining operation.

For those wanting a spook, test your nerves with these PC horror games.

In a future where climate change and overcrowding have forced people to escape Earth, protagonist Sebastian Mar is forced to join a dangerous mining mission several light years away from home. Not only is the corporation running the mission shady, but the planetoid itself is infested with hostile life that threatens the lives of the mining crew. With his life at risk, Mar must entangle his employer’s web of deceit, while also avoiding being eaten by the native fauna found on Naic.

Mar is not alone on his quest, as robots and the central AI running the mining outpost will help out during your investigations. Even so, much of the base has been worn down by the hostile environment and wildlife, meaning players will have to either fix or circumvent malfunctioning equipment to continue their investigations. This means collecting any bits of technology dotted around to build makeshift tools, weapons and medical equipment to continue exploring the crumbling base.

HEVN isn’t pushing the graphical envelope, but it successfully conjures up the unsettling atmosphere of previous sci-fi horror games like Alien: Isolation through its environmental design. Lights constantly flicker on and off, you can always hear the unnerving rumble of distant mining equipment and all the base’s technology looks like it could malfunction at a moment’s notice. It’s one to play with the lights off, that’s for sure.

HEVN is currently scheduled for release on Steam later this Spring for both Mac and PC.