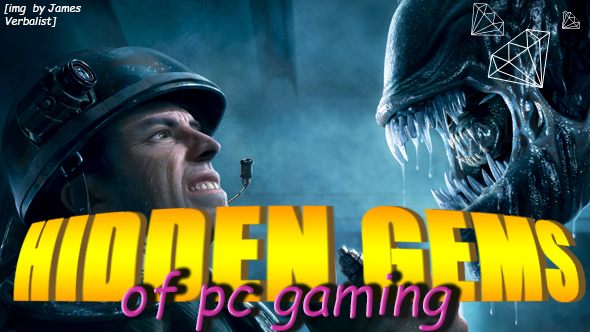 Editor’s note: the following is the third in a series of guest articles from the inane games journalist, James Verbalist. We don’t even commission him any more, they just keep turning up. Send help. Catch up with his last tour de force, Dark Souls, here.

I was eight years old when I first watched James Cameron’s ‘Aliens.’ It was a balmy evening, unseasonably hot for October, and I’d been playing a self-devised, one-player variant of tennis against my garage door all day. As I sat down before the glowing screen of my mother’s front room television, I had no way of knowing that my world would be changed forever.

Read more: some actual hidden gems that haven’t been written by a nincompoop can be found in our PC indie games guide.

Eight is too young to watch Aliens, of course. In all likelihood I’ll never truly enjoy seafood or be completely comfortable in a Laser Tag centre as a result of that premature exposure to eighties action-horror cinema, but we live with our choices.

All of which is to say, expectation could scarcely have been higher for Gearbox’s acid-bleeding magnum opus when, after many years of expertly handled development, it finally neared release in 2013. That it delivered on all that expectation, and then exceeded it so categorically, so comprehensively, so exhaustively, so conclusively and encyclopaedically, was nothing short of miraculous. Aliens: Colonial Marines was, and remains, a true gem of PC gaming. 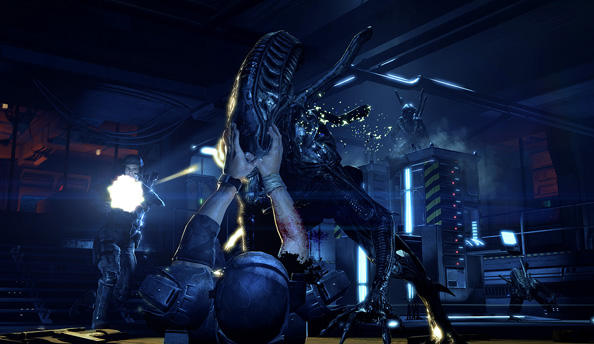 Pinpointing the nature of its brilliance, however, has proved elusive to critics thus far. From this writer’s unique position as a fan of both videogames and the Aliens franchise, I can offer some insight. Its writing is a fine place to start. Visionary game maker Randy Pitchford’s Gearbox team struck pure gold with A:CM’s script, finding new depth in Aliens’ characters that returning voice actors Lance Hendriksen, Michael Bean (who has the temerity to spell his surname ‘Biehn’) and several less famous cast members must have relished in the recording booth.

With choice lines like “You don’t DIE unless I give you a DIRECT ORDER!” and “We’re fighting for the title of BADASS MOTHERFUCKERS IN THE GALAXY! That’s a battle I intend to win”, Aliens: Colonial Marines lands on a kind of easy, believable patter between space marines that simply wasn’t present in the famously tin-eared 1986 movie. It’s that humanist approach to the game’s writing that bonds you to its characters, so that when the proverbial shit hits the f**, you feel as though you’re fighting among brothers. (And a woman.)

Plaudits must also be apportioned to Gearbox for having the daring to attach such a rich and involving plot setup to the traditionally simple ‘first-person shooter’. So often we’re fed the same cookie-cutter setup, in which the player-character is thrust into an unfamiliar and dangerous place brought about by a single cataclysmic event, which they learn more about slowly over time via drip-fed cutscenes. In a clever subversion of the norm, this time it’s you, the player-character, who is thrust into that unfamiliar and dangerous place. And it’s only over time, as Gearbox pace their narrative beats in non-interactive cinematic experiences, that you come to find out more about the nature of your situation. It could have so easily turned into a cheap roll call of original cast members, but by cleverly only managing to secure four of that cast and using a completely different actor to voice Hudson, Colonial Marines sidestepped a potential failing expertly. 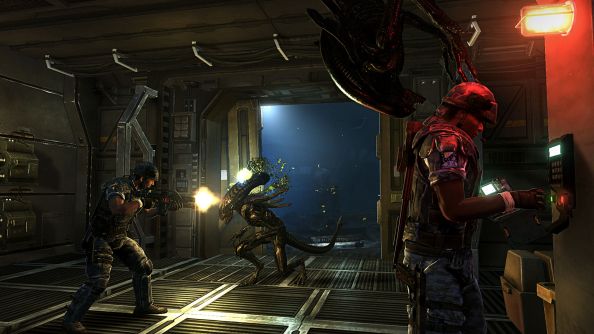 Yes, here is a game which finally lets one live that space marine fantasy the videogame player has been clamouring for since ‘86. It’s a visceral experience, unspoiled by fussy design embellishments like satisfying controls or realistic animations, preferring to focus on the fundamentals of FPS enjoyment: shooting a gun; traversing a corridor; listening to top-notch dialogue between fellow space marines. The holy trinity for shooters.

Still, it’s not afraid of mechanical experimentation, either: there are moments in which you’re given control of a turret, and instructed to place it in a certain area (an incoming horde of xenomorphs is the player’s first thought upon doing this, but Gearbox wisely acknowledged that actually delivering it would cheapen the game, and steered clear). There are also moments where you might have to reach a certain console or button in order to further the game, all the while engaging in visceral combat. In these moments your understanding of what the shooter is capable of gets a chestburster bursting right through the chest of your understanding of what the shooter is capable of.

This meaty one-two punch of cinema-beating writing and visceral gameplay is finished off with a level of visual fidelity that, at times, betters even that of Unreal Tournament 2004. Corridors beckon with shadowy, unwelcoming foreboding. Larger areas that occasionally feature at the end of those corridors, they entice with similarly foreboding shadows. Outdoor areas, carved into the surface of LV-426 by gnarled iron girders and textures of indeterminate representation, also feature quite a lot of shadows. The almost cartoonised character models, far from being a misstep, are actually a canny move to hold the attention of any very young children playing. And when the xenomorphs appear, they convey a sort of unpleasant sheen. It’s as if they’re covered in deadly vaseline. Masterful stuff. 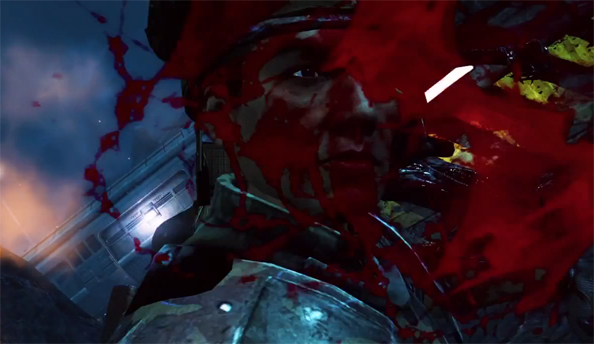 Of course, no piece of game criticism is complete without a painstaking and forensic appraisal of its sound effects, and Aliens: Colonial Marines really excels in this department. Gearbox were given the keys to the audio kingdom by 20th Century Fox and allowed to use the original sound effects for iconic noises like the motion tracker, pulse rifle, grunts (human and xenomorph), wails (likewise), and the sound of all the papers being scattered over a futuristic boardroom as Ellen Ripley tells the company men that they can kiss all this bullshit that they think is so important goodbye. Although they didn’t actually use that part. It was mainly the motion tracker and pulse rifle.

Xenomorphophiles waited seven long years from Aliens: Colonial Marines’ announcement to its release, and were treated to a finished product that over-delivered on Gearbox’s understated promises. It’s Randy Pitchford’s meisterwerk, and further proof – as if any were needed – that he’s the Hideo Kojima of the west, a true auteur who guided the project with a singular vision and an unspecified amount of additional development from Timegate Studios, Demiurge Studios, and Nerve Software.

James insists that you better yourself by following him on Twitter, where he can be found as @inanegamejourno. Join him next time for another undiscovered classic of the medium.