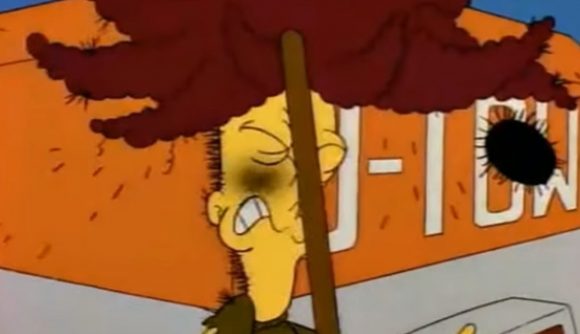 In Hitman 2, Agent 47 can kill his targets in a wealth of brutal ways. Careful object placement and understanding your target’s movements is vital for assassins and a skill that decides whether you will eliminate your target or not.

Given the endless possibilities and details Io Interactive has created in Hitman 2, a player has discovered that if you place a gardening rake in the path of a walking NPC they will step on the rake head causing the handle to swing up and hit them straight in the face just like Sideshow Bob’s act in The Simpsons (minus the incoherent grumbling).

This glorious detail was discovered by Reddit user HalpTheFan who posted a compilation video of Agent 47 pranking numerous oblivious characters. It shows several unsuspecting NPCs going about their routine, minding their own business when – WHACK – they get a rake handle straight to the face. We’ve hit peak video game here, folks.

In this newest installment in the Hitman series, Agent 47 travels to a number of exotic and deadly places in the world, one of them being the dangerous hunting ground of quiet suburban America. If you’re tired of assassinating leaders of colombian gangs, bodyguards and illuminati members, then pranking unsuspecting home makers at neighbourhood BBQs could release some tension.

This gem now sits alongside Agent 47’s homing suitcase, another Hitman 2 video a fan uploaded to Reddit. When you lock onto a target to throw an item it will hit them no matter what. Even if they walk round a corner. While technically a bug, this little hiccup in the game is so good it should be a feature.