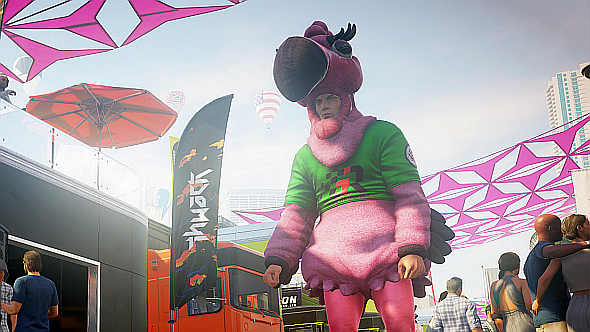 Hitman 2 will release on November 13, 2018. The release date was confirmed in a trailer from the game’s reveal event earlier today. As well as that date, the trailer revealed one of the game’s contracts: race driver Sierra Knox, whom you’ll take out in the middle of a race in Miami.

Developer IO Interactive confirms the sequel will not retain the episodic format that was such an unconventional – and generally well-received – feature of Hitman 2016. Besides Miami, publisher WB Games says Hitman 2 will take players on a global adventure to “sun-drenched streets” and “dark and dangerous rainforests.”

Here’s everything we know about Hitman 2.

Picking up where Hitman left off, you’ll continue Agent 47’s hunt for the elusive Shadow Client and unravel his militia, with continuing bombshell revelations about 47’s hidden past.

The game’s Steam page is live now and you can already pre-order it for the customary triple-A price of $59.99 (£44.99). If you do so, you’ll gain immediate access to a standalone Sniper Assassin mode, playable solo as Agent 47 or together with a friend in online co-op. That’s live now, if you’re desperate to get assassinating.

Besides the standard edition, you can pre-order gold and silver editions. The latter includes an ‘executive pack’ of digital goodies and the game’s first expansion, while the former includes all that plus the second expansion and four days’ early access. As for the trailer, you can check it out below: