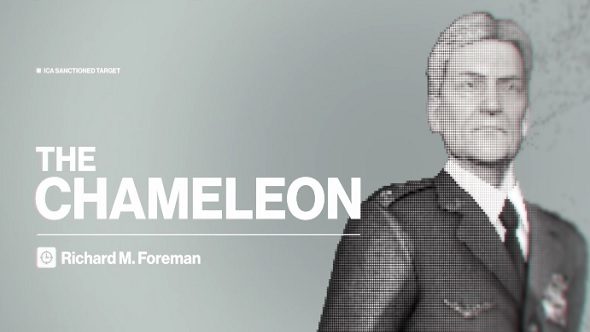 A new year, a new series of Elusive Targets for Agent 47 to hunt down. IO Interactive have released a trailer for Elusive Target 18, which sees hitmen returning to Colorado to dispatch a highly skilled actor with a penchant for impersonation.

Psst! Keep it quiet, but here are some other great PC stealth games.

Named Richard M. Foreman or ‘The Chameleon’, this Elusive Target is rumoured to be helping the militia stationed in Colorado with something called ‘Operation Highball’. The Chameleon was previously linked to the impersonation and murder of a high ranking Dutch billionaire, where he managed to siphon hundreds of millions out of the billionaire’s account in a matter of weeks. Your job is to sneak into the militia compound, kill the target and retrieve the documents related to this operation.

For this mission, you must make the Chameleon’s death look like an accident, so no quick and easy headshots from a nearby grassy knoll I’m afraid. Drownings or a sharp push off a balcony are best advised for neutralising this target. He is disguised as a decorated member of the US Air Force, so his blue suit should stick out among all the black camo and ski masks of the militiamen.

This Elusive Target appeared in Colorado on January 13 so you have until January 20 to dispatch him. Have a scout around some videos of other Agents’ successful assassinations and you should chalk this up as another flawless hit.

With 2017 possibly marking a second season for Hitman, I hope we will finally see a long awaited Chuckle Brothers-themed Elusive Target sometime in the future.