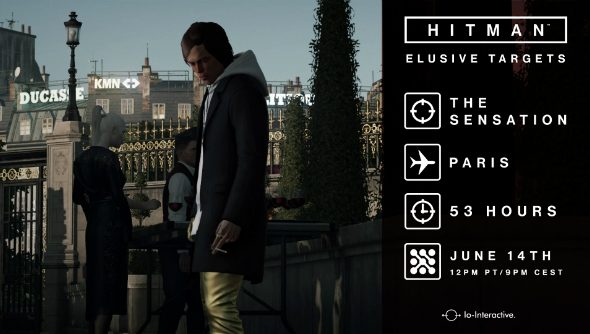 The next elusive target is ready to hunt in Hitman as Agent 47 has just over 48 hours to track down and eliminate ‘The Sensation’.

If you like the meticulous planning of the kill you’ll be into the best strategy games on PC.

Lurking within the Parisian Palace is a man wearing a jacket with an eagle on the back. Murder him for this crime against fashion.

Whether it’s a misguided attempt to emulate Ryan Gosling’s nameless character from Drive, with a bit of Aiden Pearce from Watch Dogs cosplay thrown in, he’s gotta go.

He’s done some other illegal stuff too, but all you need to know is that for the next two days (until Friday 01:00 BST/Thursday 17:00 PDT) you’ll have just one shot at removing him from the planet as quietly as possible.

This is the fourth elusive contract, so if you’ve gotten them all so far there’s only one more until you unlock the Hitman Absolution signature suit, with an ICA tie pin and those sweet black leather gloves.