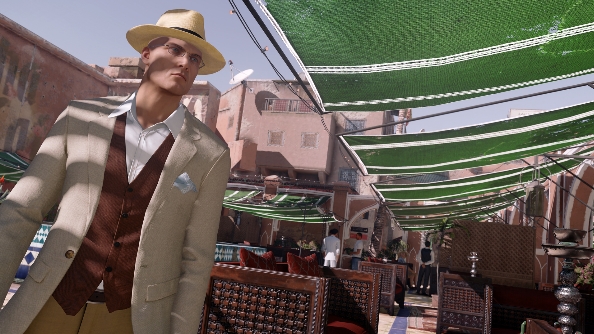 When Hitman was originally announced to be episodic, few people were convinced that it would meet the quality bar it has. Paris and Sapienza demonstrated that the stealth sandbox was perfectly tuned to the formula. A Gilded Cage, Hitman’s Marrakesh contract, does nothing to dispute that. In fact, it shows that with each new instalment the game is going from strength to strength. To strength.

Looking to experiment in a murder playground? You need one of the best sandbox games on PC.

The African-set mission is a mind-blowing collection of opportunities so dense and complex that it’s guaranteed to make it onto the Hitman wall of fame alongside the likes of Blood Money’s Curtains Down. The map is a sprawling network of corridors through a noisy grand bazaar marketplace, leading up to the sparkling, glass-fronted Swedish Consulate building. It’s surrounded by angry protesters on the verge of riot, akin to the tense embassy scenes from Argo. Inside that glittery, minimalist kingdom lies one of your two targets and the subject of the protesters’ anger: a private banker and faudster by the name of Claus Strandberg. 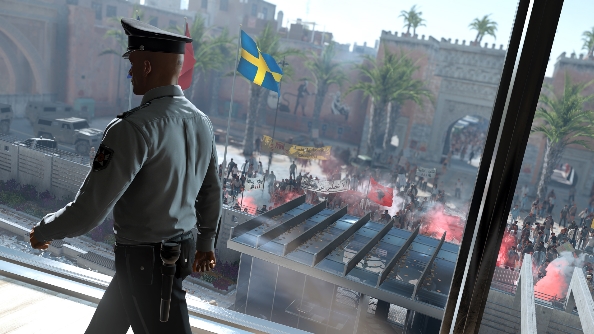 Finding him to force a pistol barrel in his mouth is no easy task, and during my hands-on time with the mission I spent a good half an hour winding through the dense, suffocating crowds of people attempting to discover my route in. These crowds make your task rather challenging; not only are they incredibly claustrophobic, but it means you’ll very rarely find a moment where you’re alone. And when every NPC is a potential witness to your crimes, it becomes a game of finding the half-second of opportunity to make your moves.

After winding through the area and scouting out several of the episode’s opportunities, I settle on what feels like the most direct route to my target. A news crew have secured an interview with Strandberg, but are waiting for their cameraman to arrive. Time to intervene.

The cameraman, a loud-mouthed chap frequenting the local shisha cafe, is easily found thanks to him shouting down his phone about having accepted the camera job but having no intention to turn up. Needing a way past the ‘members only’ barrier into the cafe, I have to pilfer a guest pass somehow. The solution lies in a nearby bathroom, which I flood in attempt to lure a clueless member inside.

My hunt takes a few attempts. The first two people who enter the bathroom are not members of the club, and after two tries I find myself with a couple of dead civilians hidden in a laundry basket and no pass. Thankfully the third passer-by is part of the exclusive clique that I seek. 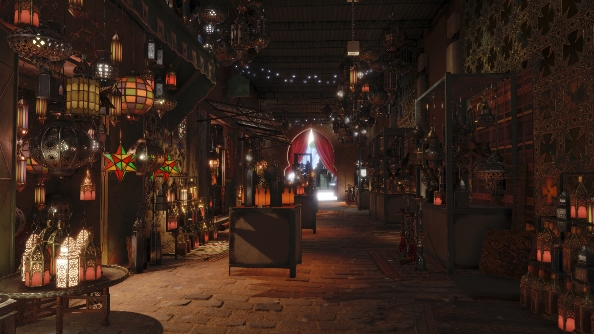 Pass in hand, I saunter through the gate unchallenged and target the cameraman. A fiddle with a music system and a punch to the back of the neck later, I’m decked out in cargo pants and a ridiculous baseball cap. Time to roll the cameras.

Being part of the news crew, I’m allowed past the armed guards and through the consulate complex with no hassle. At the reception desk we’re introduced to the staff and told about the detailed evacuation procedure should there be an emergency. Upstairs, I set the cameras rolling and watch as grandiose statements start flowing from Strandberg’s mouth. Then I remember I’m not actually here to be a journalist (easy mistake to make. Don’t confuse games with reality, kids). I need to kill this guy, and have nothing planned. The room is full of office staff and security guards, but nothing I can improvise with.

The interview ends before I can work something out, and the crew begin to move from the room. Panicking, I slide through a side door which happens to be the security office. Knocking out the guard and donning his uniform, I’m granted more precious time to remain in the building. But the place is crawling with admin and security. Strandberg is never in a room alone. How am I going to make this kill?

Then I remember the receptionist and her explanation of the evacuation procedure. Perhaps I can get a panic going and strike during the chaos?

The fire alarm wails, and Strandberg begins his run to safety. I frustratingly miss him by a split-second on the first-floor landing, my precious moment to hurl him from the bannister gone. As I fly after him the rest of the security detail cotton on to the fact I’m not one of them. I sprint through the front doors as a hail of gunfire erupts. 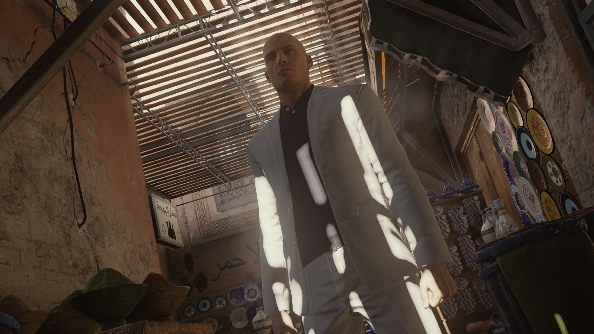 With hitman sense active, I can see my target making it through the tight streets of the marketplace. I’ve not got too far to chase. But neither have my enemies. The streets are home to dozens of military guards packing assault rifles, and they’ve heard the news about a bald guy in a security suit. I barely make it out the crowds of protesters before I’m torn to shreds.

I may have failed, but I was eager to try again with a new approach. During my two-hour session with Marrakesh, I must have made five entirely different attempts on Strandberg’s life. The map is brimming with all kinds of possibilities, perhaps more so than any mission in Hitman’s history.

It’s also one of the most challenging. I’ve never done well in a Dark Souls game, but the feeling of satisfaction I had in Marrakesh when I finally made it past a difficult section reminded me of how people react to finally defeating a Souls boss. Two very different types of challenge, but with a shared sense of elation upon cracking them.