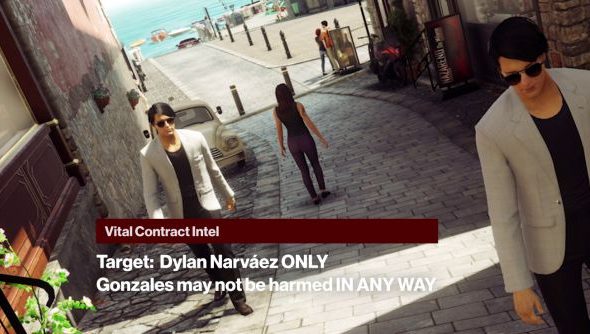 Io are upping the complexity of their Hitman elusive targets. The next, titled The Twin, involves two men in Sapienza, but only one of them is the target. The other has to remain totally unharmed, or you fail. It’s releasing next Friday, July 15, and the announcement is partnered with the release of a companion app for the game to be used for keeping players up to date on live content.

Read more: our favourite sandbox games for a nice day out.

The Twin will run for 72 hours and is designed to be Hitman’s hardest challenge yet. Dylan Narvaez is the target, but if his brother Gonzales is hurt in any way it’s over. They’re coming to the Sapienza map next Friday, if you plan to catch them.

As for the app, it’s available on iOS and Android now. I’ve just grabbed it and it seems like a relatively simple news feed, but does provide the option of push notifications whenever a new target is available or news about other Hitman live events is released. It’s also an easy way to have a picture of your target ready to go for when you’re looking through the streets.

That’s available now, if you’re into it. There’s been something new every week since Hitman first launched, so if you’re playing regularly it seems like a must-have.