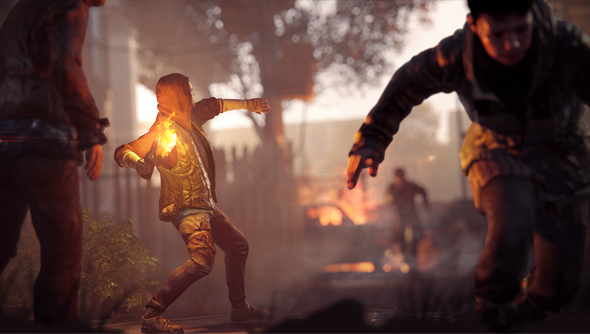 It may say Homefront on the box, but it feels like Crysis. Not just any Crysis game: the Crysis game we’ve been waiting to play since Crysis 1: an open world free-roaming shooter set in a dystopian version of Philadelphia, four years into the North Korean occupation of the USA.

This is the first time Crytek have made a proper open world game. Their previous shooters might have included sandbox areas that let you choose how and when you will make an assault, but in Homefront: The Revolution Crytek have gone the whole hog. You’re given a whole city to play with.

“It’s a free roam city,” David Stenton, a game producer at Crytek Nottingham, explains. Parts of the city are locked off behind KPA (Korean People’s Amy) barriers at the beginning but as you upgrade your abilities and further the plot “you gain access to new areas. Towards the end of the game you you can go wherever you like and explore previous areas. It’s not linear like Crysis 2.”

The city is recognisably Philadelphia, but Crytek aren’t “aiming to do a like for like recreation. We’re taking the landmarks and putting our own spin on it.” Their focus is on “density of content, systems, and attention detail more than size.” 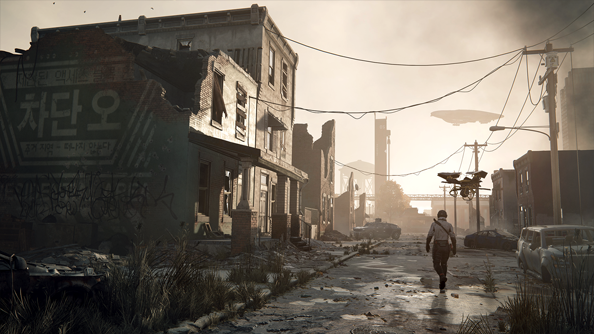 The setting fits Homefront: The Revolution’s theme perfectly. Philadelphia is the birthplace of American independence. It’s the home of Independence Hall and the Liberty Bell. It’s where the declaration of independence was signed in the midst of war with occupying England. And it’s where the KPA have established the capital of their occupied United States.

“The KPA rule Philadelphia with an iron fist. They’ve got watch towers, drones patrolling the streets, propaganda, they round people up into ghettos,” says David. 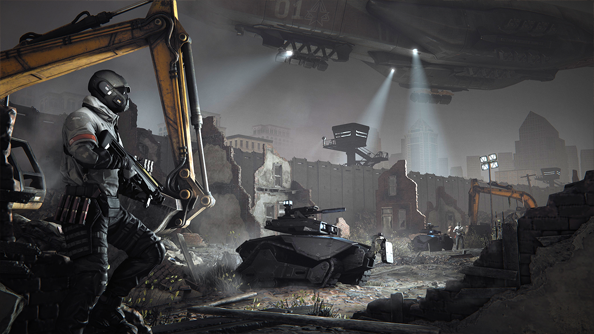 Within that bombed out city is where the resistance is forming. The demo we’re shown opens in the basement of a ruined building, a munitions factory for the resistance. Every surface in the room is littered with bits of cobbled together weapons and equipment. People sit making molotovs out of discarded bottles and old rags. This is a far cry from the high tech suits and weapons of Crysis.

“We give the player the tools and components to build what we call ‘the guerilla toolkit’. You’re scavenging for everyday items like containers, chemicals, and rags. You can craft an improvised explosive device and combine this with a remote control car to sabotage an enemy installation.”

David receives a text that’s a picture of a local police station. The KPA have captured three members of the resistance and he’s going to go break them out.

Outside the resistance hideout is a shanty town marketplace built of corrugated iron and scrap wood in the shadow of the Philadelphia’s iconic Walt Whitman bridge. It’s obvious now what David meant by density of content. The scene is full of clutter, broken bottles, waste cans, graffiti, burning braziers, and people. 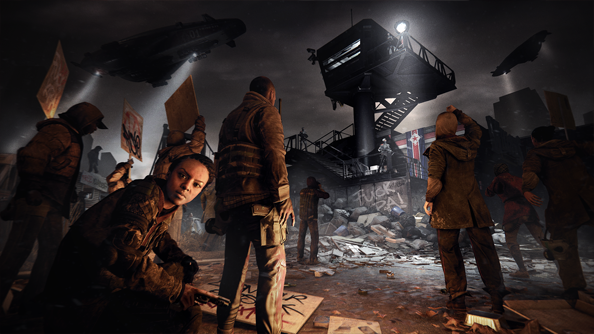 “This is a Philadelphia where it’s not only run down and ruined, it’s got those elements of KPA infrastructure layered on top.It’s augmented by those walkways and watchtowers and visual cues showing an oppressive environment.”

The regime makes itself known immediately. In an alleya drunk shouts insults at a pair of KPA guards. Within seconds they have him kneeling in cuffs. A drone hovers over the scene cutting through the night with its flashlight, taking pictures. It’s a decade since we first walked the streets of Half Life 2’s City 17 but the influence is clear.

David doesn’t deny it: “Games like Half-Life 2, they definitely did a good job of dystopian future but we want to take that torch on and use it within CryEngine.”

A message comes in over the radio. Two other players are already at the police station waiting for David’s support. This is Revolution’s greatest trick: the rich sandbox of Philadelphia Crytek have built can be played in four-player coop. You can contact each other with your phones, send photos, mark targets, and make plans on a shared map. However, while “it’s in the same space and you can perform a lot of the same kind of gameplay experiences, it’s really within a different game mode entirely.” 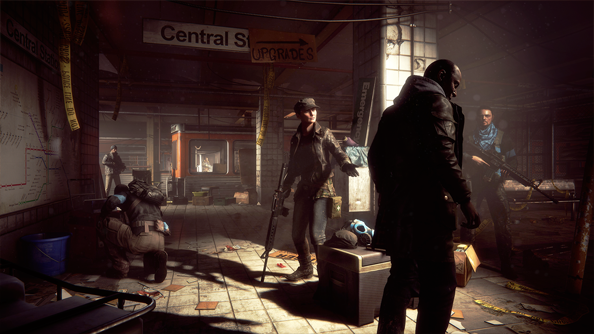 As David leaves the marketplace he comes across a KPA guard overseeing two prisoners in orange jumpsuits painting over graffiti. He sneaks up behind the guard, breaking his neck. The prisoners do a runner, not wanting to be blamed for the attack. Somewhat crudely, a notification pops up on the screen saying David’s earned some uprising points. When you pass certain point milestones the resistance will grow. He earns more points when he smashes a security camera with a brick – a popup informs is that it was 1/15 cameras in the area. If he were to smash all 15 cameras, his actions would be reflected by changes in the environment.

“It’s a reactive occupation, within this ecosystem it’s up to you to observe the systems in play,” David explains. When you destroy all the cameras, it will be reflected by more open resistance in the area. But “you’ll see the systems push back.” The KPA will try to return to the area unless they come in body armour and APCs. Crytek’s Philadelphia has ambient patrols, civilians, and resistance groups.

You’ll need to learn to read the environment – graffiti on one of the buildings tells us that there’s a resistance weapons cache inside. David breaks into the basement of the building, an abandoned shop, and finds ammo and some weapon attachments. Like in Crysis you can adapt your weapon on the fly, adding scopes, fore grips, and flashlights as you need them.

Outside the old store is the police station. A group of civilians are protesting outside, hurling abuse at the guards. “Later on in the game, as you build the resistance, you’ll see more resistance on the streets instead of being populated by civilians.” 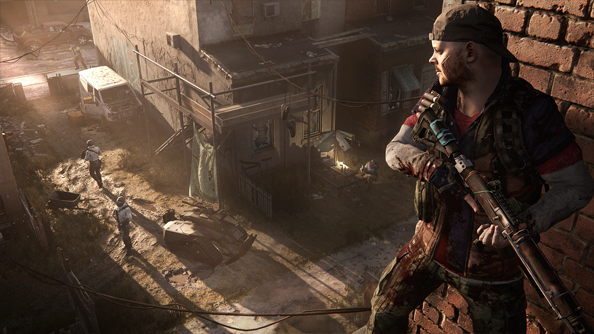 The other players are hiding in the crowd, their weapons holstered. “If you run around with your gun out under the eyes of the KPA you’ll get crushed,” David says. He ducks behind a car and starts making a bomb. He straps the thing to a remote control car and waits.

Elsewhere in the city a fourth player makes a distraction, attacking a KPA guard. The guard calls for help and an APC is dispatched from the police station. When the APC returns David spots his moment. He drives the remote control car in through the gates, hiding it under the APC as it drives into the garage.

With the explosion everything changes. A siren goes off inside the police station. The KPA start firing into the crowd. Civilians run in every direction, screaming and looking for cover. The resistance make themselves known, firing back at the officers, freeing the prisoners.

Later David would tell me that “in the E3 demo you can’t actually kill civilians at all.” So when David was firing on the police station there was no danger of them becoming caught in the crossfire. That will change by release. But they’re not planning on tying civilian casualties to the popularity of the resistance. And, while “all the terminology, like IEDs, is intentional,” evoking terrorist groups, “we’re not planning to have suicide bombers. That would be an area of politics… it’s not our priority at the minute.”

Back at the police station David runs half crouched behind a line of cars. He doesn’t show it here but “you do command other resistance fighters,” directing them against the KPA. Instead he shows off how mobile you are in Revolution – he scales walls, leaps over obstructions, and, while not up to Mirror’s Edge standards, shows that you’ll be able to find lots of unconventional routes through Philadelphia’s streets. 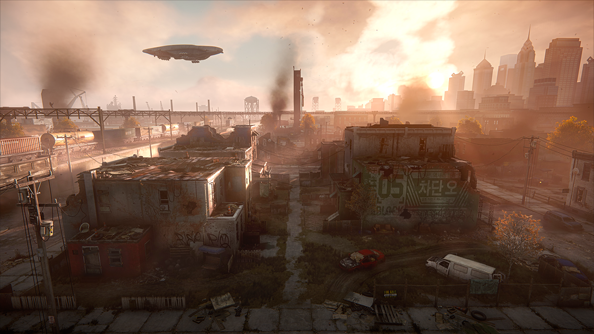 With the freed prisoners David enters a sewer tunnel that takes him away from the firing. Over the radio one of the other players says there’s a street battle starting out in Philadelphia’s redzone, a resistance stronghold. All four players converge on the action and, just as the demo ends, we catch a glimpse of the conflict. The redzone looks like the blitzed London. Buildings reduced to rubble, collapsed roofs, burned out cars, and, between it all, resistance fighters taking on the massed KPA troops.

The demo we were shown left me wanting to leap into this dystopian world and start organising my own resistance. Crytek look to have grown Crysis’ sandbox into a larger, richer game.