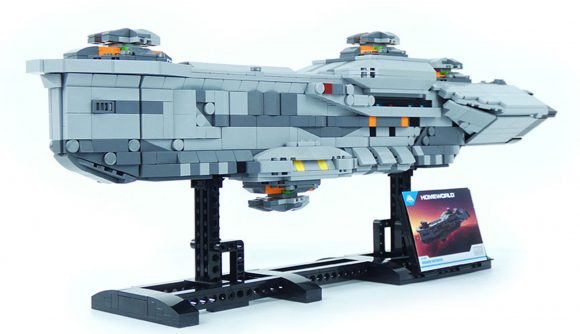 Lego bricks have been appearing in videogame form for decades, but despite the prolific volume of movie-licensed Lego sets, games have had little opportunity to get turned into packaged construction sets. We finally got Overwatch Lego sets last year, and – incredibly – we can buy Homeworld sets, too.

While these ship designs are officially licensed, they’re not produced by Lego. Instead, they come courtesy of a company called Brick Formation, which specialises in producing “IP licensed kits made from genuine Lego elements” – a fancy way of saying this company will take on projects Lego itself will not.

While there are plenty more sets planned, the initial line-up includes three Hiigaran vessels, and as Kotaku notes, they are all incredibly expensive. The smallest set, the Interceptor, consists of 500 pieces and is $250. The Ion Cannon Frigate has 705 pieces for $300, and the lineup tops out with the Destroyer at 1365 pieces for $575 pieces. I’ve been out of the Lego scene for a long time, but the last I recall a 500 piece set should be around $50.

I guess you’ve got to pay a markup for custom engineering.

Read more: Build it your way in the best sandbox games on PC

Check out some Rainbow Six Siege Lego while you’re here. Even if you’re not intent on buying expensive new sets, there are plenty of fan-made creations that you can enjoy looking at for free.