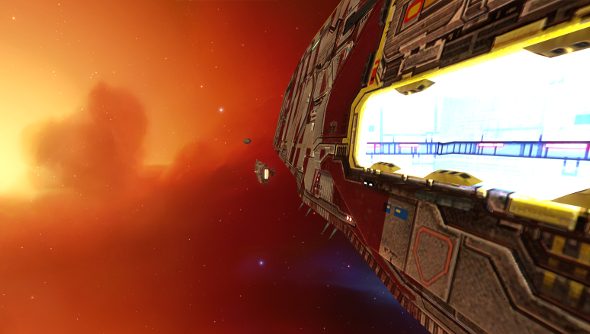 Even when they’re given a chance to put together that coveted Director’s Cut, no director can ever truly stop cutting. Homeworld: Remastered is the definitive version of the interstellar RTS series – at least until its far-reaching new patch arrives. Gearbox have fiddled with it a lot.

We judged the latest Homeworld, Deserts of Kharak, to be one of the best strategy games on PC.

There have been grumbling in the community, who have seen campaign bugs and ship formation issues go unaddressed in the year since Homeworld and Homeworld II’s remastered release. But Gearbox are apparently far from abandoning the games they worked to bring back.

“We’ve been heads down on this patch for six months,” Gearbox’s Dave Eaton told fansite Fists of Heaven. “Which can make us look like we haven’t been paying attention, but we have.”

There are lots of bug fixes in the offing, not to mention a complete rework for those formations. The game engine now treats all ships as one unit, rather than locking certain craft into smaller squadrons, setting the stage for “intelligent” groups that automatically rearrange themselves based on class and weaponry.

That’s not the only Gearbox place have had their hands deep in Homeworld’s systems: projectile weapons will now obey “true” ballistic behaviour rather than RNG; ship targeting now works fundamentally differently; both single and multiplayer will benefit from shifts in balance.

Our Fraser thought Gearbox did a bloody brilliant job when they remastered Homeworld. What did you make of its majestic return?