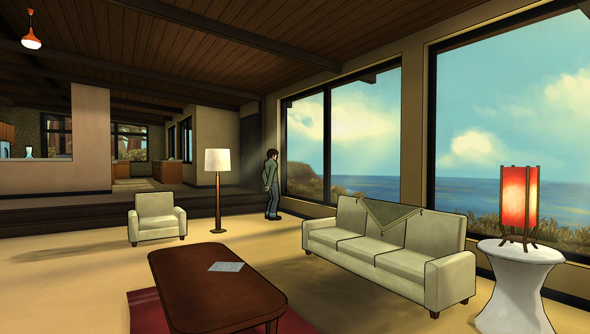 The critical and creative bludgeoning of what eventually became The Bureau, and the eventual demise of Irrational spin-off studio 2K Marin, is one of the most depressing tales to be told of recent AAA development. But it’s already yielded enough silver linings to build an entire web of indie promise. In Gone Home and Eldritch, ex-Marin staffers have already built on BioShock’s baseline better than Infinite did – and now a third game, The Novelist, promises to react to your choices in all the ways Infinite didn’t.

After a decade mostly spent following-up immersive sims in Deus Ex: Invisible War and BioShock 2, Kent Hudson quit his job. In October 2011, he only knew he wanted to make something that didn’t leave him “creatively restless” – but via a GDC talk on ‘Player-Driven Stories’ he started on The Novelist – a game about exploring a remote coastal house, that shifts in response to your choices.

You’ll look about the place, reading its family’s thoughts and sifting through their memories. Though its central conceit sounds Gone Homely enough, the only ghost in the house is you – you won’t play the protagonist, struggling writer, husband and father Dan Kaplan, but instead drift about his house, making decisions that will steer the course of his relationships. In every playthrough, your choices will produce a (potentially radically) different series of events.

In a nice ectoplasmic touch, you’ll inhabit the house’s electrical devices, leaping from lamp to light fixture, only leaving their warm glow when it’s safe to do so. You’ll directly read its residents’ thoughts to discern their needs, and do your utmost to keep the family together while Dan writes his book.

Hudson is asking a question with The Novelist: can a person follow their dreams while remaining connected to those they love? While it wasn’t originally intended as such, you might not be surprised to learn that it’s become somewhat autobiographical during development.

If you’re also wondering: Daniel Kaplan is the name of Mojang’s business guy. He is not the protagonist of The Novelist. I’ve checked.

Part The Sims as stealth game and part voyeuristic adventure, Hudson’s first indie effort looks entirely new. It’s out on Steam from December 10 for $19.99, though it’ll be subject to a hefty launch discount. Intrigued?