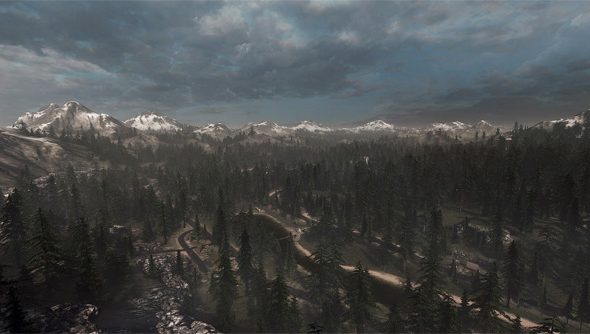 So we now know that The War Z only has one map, despite Hammerpoint having initially advertised multiple maps of between 100 and 400 square kilometres each. That’s fine, a misunderstanding that’s been corrected. The store page now correctly lists just one map, Colorado, though Hammerpoint still claim that it’s 100 square kilometres in area. It certainly doesn’t feel that big, so it’s probably wise to check.

Roughly. Certainly nowhere close to 100 square kilometres. Let me show you my workings, which involve crouching next to some trees with a stopwatch. Here’s an overview of The War Z’s Colorado map. There’s no scale to work with here, so instead I measured the time it took to walk between two grid lines, which turns out to be three minutes and thirty seconds. This is useless without knowing the walking pace of a War Z character however, so in order to estimate that I lay prone and used my character to measure the distance between two trees. To do this I had to assume my character’s height to be that of the average American male, 5’10”. I could fit nine of him between those trees. It was very dark. Knowing the distance between the two trees to be 52.5 feet, or 16 metres, I used the time it took to walk between the trees (11.6s) to get The War Z’s walking pace of 1.38m/s (which is a little faster than typical human walking speed, but there are zombies, so that makes sense).

With the speed and time recorded, it’s possible to measure the distance between grid lines as 289.8m. This gives every grid square on the Colorado map an area of 83,984 square metres, or 0.083984 square kilometres. All we have to do now is add up the number of squares on the map. Of course, a huge chunk of the map isn’t actually playable, so I’ll mark the area we’re measuring in red. This is something, I’m beginning to think, Hammerpoint didn’t do. This is why developers don’t like to talk about their maps using real-world scales — you can shrink or contract a game universe by changing the relative length of a metre stick, or by claiming that the game takes place in a dimension that’s identical to ours only everything is double-sized, even players.Measurements of map sizehardly matter either, if a map is sufficiently large or appropriately detailed, its borders shouldn’t concern players. The Colorado map perhaps represents as big a chunk as Hammerpoint claim, but it’s not practically that large.

Or hey, maybe I counted wrong.

Hammerpoint are currently testing their next map, California, which they claim to be 420 square kilometres in area.