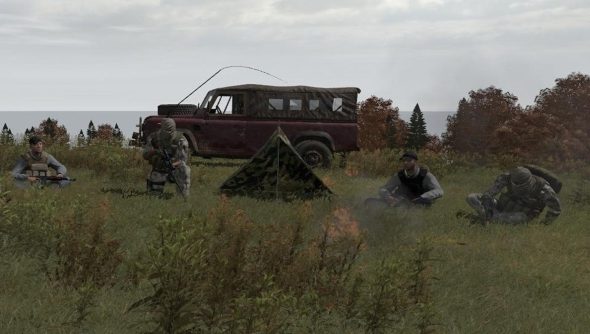 It’s nearly two years old, it’s not even on sale, yet at the time of writing Arma II: Combined Ops is outselling every game on Steam. There’s a direct correlation between the rise of Arma II, and the release of a remarkable zombie survivalist mod called DayZ. Here’s what happened.

DayZ is the sort of game you’d dream a publisher would take a risk to make: a shooter set in a persistent open-world, in this case the 225 square kilometres that Bohemia Interactive built for Arma II: a heavily wooded, green, yet run-down Eastern European landmass. You’re deposited somewhere on the coast with no beginning to your story. There’s no plot, here. No guidance. No direction. You have a small pistol, some ammo, some flares, some food and water.
You don’t even have a map.


You have to enter the world and make of it what you will. You have to learn how it reacts to your presence (overwhelmingly hostile), and how to minimise yourself while finding supplies and hunting. This isn’t about finding a quest giver and hunting rats: it’s about you making decisions and living with the consequences. All the while you’ll be needing to eat, to drink, to stave off any injuries. It has a day and night cycle tied to the server’s own clock. You can scavenge, you can hunt, but you need to be on the move constantly to have any hope of seeing the sun come up.
The undead are (currently) NPCs: they’ve been reanimated to shuffle, stalk, some skitter across the ground on all fours. If you’re quiet and keep low, you can crawl past them close enough to see the reds of their eyes. Their eyesight is terrible, but if you fire a weapon near them they’ll come sprinting. You make a choice with every squeeze of the trigger. And it’s not just the undead you need to consider.
Humans are the real threat when the threads of society burn in a fire: you’re not terribly surprised when a shuffling deadite lunges at you, it’s primordial brain a jumble of instinct and hate, but when a human does it? It cuts. Gunshots are signals. They flash bright in the dead of night, the sharp crack of a bullet is unmistakeable. You make noise and even if the undead somehow miss it, you’ve probably marked yourself on someone’s list.
It’s not a pleasant experience, to be lured into a trap by someone in chat begging for help, but the moment it happens it changes you. You keep to the edges of the world, you watch things go down that you could have prevented, but the brutal nature of what you’re fighting, the world, the enemies, the people, keeps you from running in. People are always reading the game’s chat channel; some will help you through a touch fight, but others will take advantage of your weakened state, your low ammo. They’ll offer help, and when you meet they’ll kill you and take your supplies.
Of course, a game like this generates stories. Relateable humanstories: vengeance, greed, hatred, but also tales of friendship struck up on the road. Those stories are what spread it like a virus. Everyone that plays DayZ comes away with something to say, and everyone that reads them wants to write their own. The tales of DayZ are taking over the internet.
The disparate parts are not particularly new: it feels like Stalker as an MMO, but then there’s never been a Stalker MMO. It doesn’t play like ArmaII, but the layout of Chernarus hasn’t been altered: just grubbied up.
One thing’s for sure: Bohemia’s mod support has resulted in sales of an order of magnitude that their game has never experienced, and more players are playing it than ever before. DayZ is so popular that even getting a game is tough: more server are added everyday, and they’re nearly all always full. If you haven’t yet tried it, and own Arma II and it’s expansion Operation: Arrowhead, you should give it a go: you’ll have to get in line, though.
{"schema":{"page":{"content":{"headline":"How a zombie mod dragged Arma II back to the top of the Steam charts","type":"news","category":"arma-ii-operation-arrowhead"},"user":{"loginstatus":false},"game":{"publisher":"Bohemia Interactive","genre":"FPS","title":"Arma 2: Operation Arrowhead","genres":["FPS","Simulation","Strategy Gamer"]}}}}