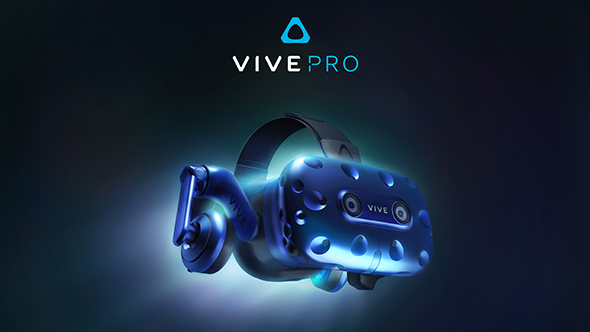 HTC have announced a big new revision to their VR display. Called the Vive Pro, the new headset features increased resolution over the base unit, as well as integrated audio, improved ergonomics, and various other improvements. They’ve also announced a new wireless adaptor set to remove the tethers on both Vive and Vive Pro.

Have a look at the best VR games on PC.

Vive Pro’s new dual-OLED displays feature a resolution of 2880×1600, which is an increase of 78% over the original, bringing greater pixel density and better sharpness to the unit. The Pro features integrated headphones with a built-in amplifier, dual microphones featuring active noise cancellation, and dual front-facing cameras.

HTC say details on the Vive Pro’s price and release “will be made available soon.” The unit is supposed to be available to existing owners this quarter, with a standalone bundle to come later in the year.

The company also unveiled the Vive Wireless Adaptor today, for both models of the headset. Featuring Intel’s WiGig technology, the unit operates in what HTC calls an “interference-free” 60Ghz band for better performance. The adaptor will ship worldwide in Q3.