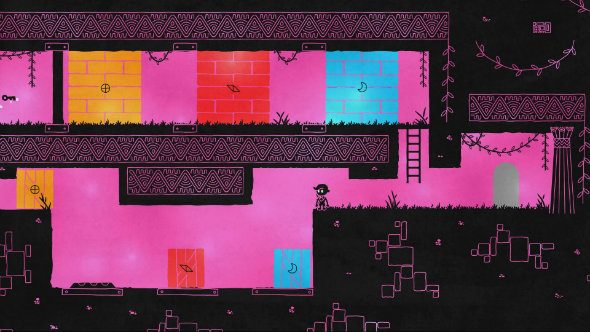 Hue is a cool concept – a2D platformer where you traverse a dull, grey landscape, shifting coloured filters via a radial menu, popping objects in and out of existence to dodge traps and cross gaps.

Our list of the best indie games is also full of cool ideas.

In this world everyone sees in greyscale. In a bid to find his lost mum, Hue pieces together her research slowly uncovering his ability to see and shift between colours, the mechanics getting more complex as his journey presses on.

“Hue has been almost universally loved whenever we’ve taken it out to shows,” says Dan Da Rocha, from developers Fiddlesticks, “so we’re incredibly excited to be finally getting into people’s hands properly. We’ve spent the last couple of years in Hue’s world – it’s going to be brilliant to welcome some more visitors.”

“The colour-changing puzzles bring something genuinely fresh to the genre – we’ve had a real blast designing them,” adds Henry Hoffman, from Fiddlesticks. “Some of the latter stages of the game are incredibly devious – we’ll be taxing parts of the brain untouched by previous games.”

When I first saw the trailer I was rather concerned, as it looks like my nightmares, as a colourblind person. However, there will be full colourblind support, and it’s not just a filter like many games, instead using symbols as well as colour to help us along.

Hue is due for release on August 23.