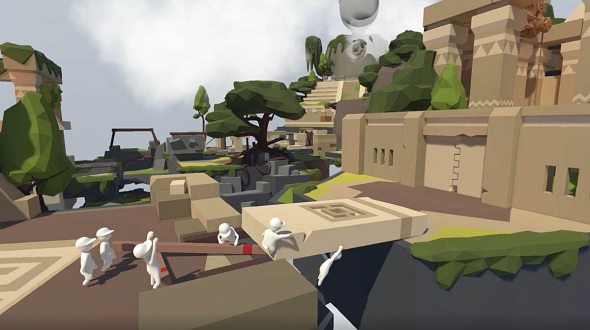 One of the funniest things in the world will always be seeing another person fall over. You know, so long as they don’t get hurt too much. We are a species that thrives on a bit of schadenfreude. And that is what Human: Fall Flat is all about, to an extent.

It’s been out for a while now so it’s likely you’ve either played it or seen someone else play it. In which case, you’ll know that Human: Fall Flat is a physics-based comedy set in a dreamscape for you to explore and solve puzzles within. You play a hapless human-shaped creature called Bob who is prone to stumbling, flailing, and falling over.

It’s challenge enough, then, just to get Bob to move around. But you have to do much more than that: there are floating lands and tall apparatus to climb, industrial machinery to fix and operate, walls to smash through, buildings to assemble, and much more. And you have to make your way through all of it in order to escape, all without letting Bob fall clumsily to an early death, which will happen at some point – it’s guaranteed.

Now, here’s a question: how could Human: Fall Flat’s concept be improved upon? The answer is But recently it has got even better as it got multiplayer support. For now, it’s local co-op only, but you can play with up to eight of you, all of you working together and, no doubt, laughing at each other’s misfortunes. Why cooperate when you can push each other over, right?

With this recent update, it’s a good time to jump back into or start playing Human: Fall Flat. And you will want to bring some friends with you. Good job we’re giving away 100 Steam keys for the game right here then, eh? That’s right, you can enter for a chance to win one of them via the widget below.

Every action you complete is worth one entry into the giveaway, and the more actions you complete the more chance you’ll have of winning. We’ll also need your email address so we can send you the ticket upon winning – we won’t send you spam, we promise.