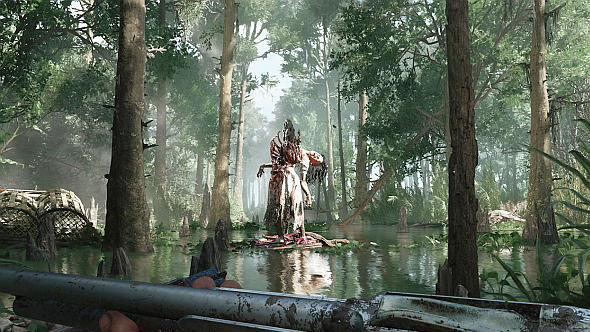 With its Weird West setting, smaller scale, PvE objectives, permadeath, and lack of a shrinking circle of doom, Hunt: Showdown offers something a bit different in this sudden flood of battle royales. Yet, almost as soon as it released in Early Access in February, cheaters have been a problem. Developers Crytek have now discussed their countermeasures.

Here’s what makes Hunt: Showdown stand out among the battle royales.

Currently, Hunt uses a third-party service – Easy Anti-Cheat – to sort out bad actors. The devs explained the process by which EAC are used to ban accounts, which resulted in a recent banwave: when a report is received, it is forwarded to EAC for investigation. If they determine that the reported player is legitimately cheating, any others caught using the same cheat will be caught shortly thereafter. If you’d like to help this process, you can create a support ticket here.

That’s the state of play, but Crytek say “anti-cheat is an ever-changing, constantly growing system”, and they have plans to keep it robust. “This will include looking into to more ways to detect players who prefer to circumvent the fair rules of the game, as well as looking at removing those that cheat from our leaderboard.”

However, Crytek do note that some common bugs can give the appearance of cheating, such as players appearing to teleport or ignore direct hits (normally a connectivity issue). Missing walls, textures, or weapons missing from players’ hands are also all current bugs in the game, unrelated to cheats. Well, it is in Early Access, after all.

Here’s the announcement in full at the Hunt website, and here’s its Steam page, if you want toget in on the fun.