19th century Louisiana. Amidst the rusted ranches and gurgling swamps, all manner of monsters prowl, some with eight legs, some with exposed brains, and one or two which are on fire. Apparently the denizens of Hell have got the wrong address, but as you’ll soon find in Hunt: Showdown, Hell is other people. OK, Hell is also frothing zombie dogs with glowing eyes, but it’s mostly other people.

Your job, as a bounty hunter of the supernatural, is to get paid. You do that either alone or by banding with up to two players (they can be friends or randomers) before taking out targets and escaping with the loot. That’s easier said than done when you’re competing with rivals doing the same, often with better weapons than you.

Each match starts you in a random location. To find clues, you have to enter dark sight, an alternate vision mode where ghostly blue hues guide you to the goal. Whichever ethereal waypoint you pick to follow, you’ll likely end up at a place with a name like ‘Port Reeker’ or ‘The Slaughterhouse’. Once there, interact with the charred hole in the ground for directions to the next one, repeat the process twice, and then proceed to the bounty. Dispatch whatever giant spider or bloated ghoul lurks there and then proceed to the extraction point before other players kill you.

Along the way you’ll encounter truly grotesque AI enemies, from squirming leeches to metal-plated monstrosities. Despite some brilliantly demented designs, they’re little threat. For starters, you’re quickly able to outrun most of them, and given the choice between tussling with a lady that shoots bees at you and not doing that, it just makes sense to scarper. Rolling objectives do task you with killing set numbers of foes for meagre rewards (support items, currency etc), but other players will hear your gunshots for miles, effectively limiting PvE combat to a series of melee bashes. 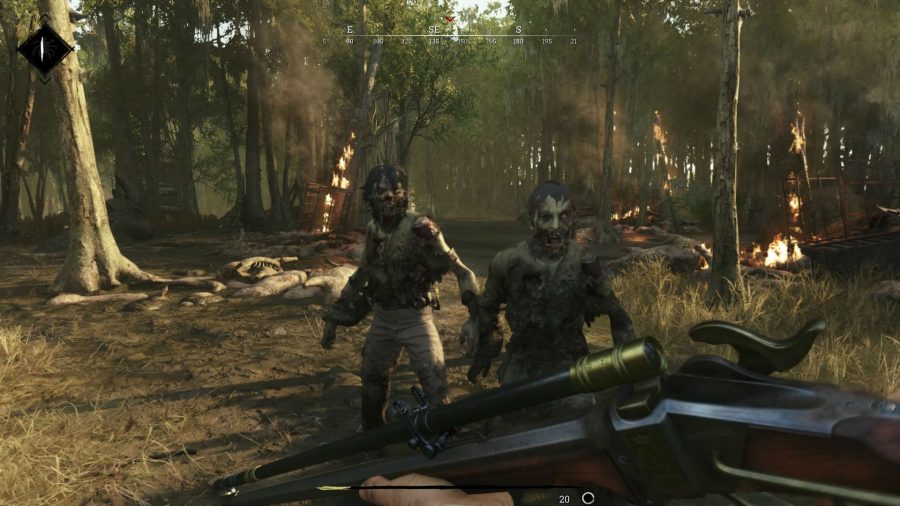 Developer Crytek does use sound in clever ways, however. Flocks of crows, creaking boardwalks, and maimed horses wailing on the ground all signal your presence, while inside, jangling chains and crunching glass are to be avoided. There’s even a 3D viewer in the menu that lets you see your weapon firing, and hear how its gunfire disperses at various distances.

death claims everything you bring into battle: even your cool hat

In practice, though, audio cues don’t offer much of an advantage. It’s more fruitful to pursue the next clue, which you’re specifically directed to, than set off in the vague direction of gunshots and neighing. You’ll be doing a whole lot of walking in Hunt: Showdown, so any opportunity to lessen the leg work is one you’ll gladly take.

Apart from getting locational pings when other players are attempting to extract a bounty (there’s a short countdown before you can take the loot), luck decides who spots who first. This colours encounters with punishing randomness. 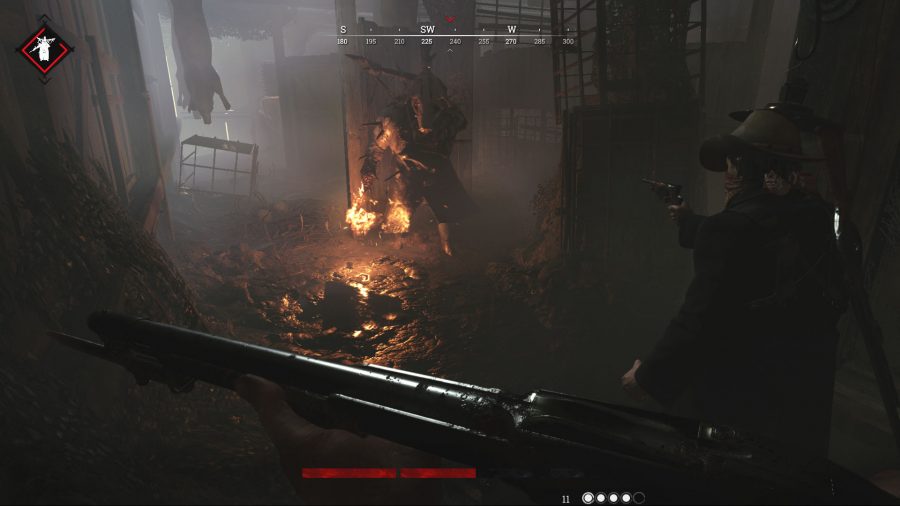 At one point, my partner and I spend ages crouch-walking through an abandoned barn, bonking disinterested townsfolk on the head, when suddenly a human player lobs a molotov from off-screen and fries us both instantly. Another occasion, despite raising no alarms, we drop dead out of nowhere courtesy of shots from a concealed sniper. It’s in these cases Hunt: Showdown is at its cruelest, especially since dying forfeits your inventory.

In Hunt: Showdown’s interactive levels, you can go around poking everything. There are gramophones to cause diversions, lamps that combust when shot, lifts to reach high vantage points, and bear traps to set down. It’s difficult to use them effectively though. Best to just hide in a bush.

After the first ten levels, death claims everything you bring into battle: your weapons, your consumables (syringes, molotovs, ammo), even your character and their cool hat. Replenishing your stocks with in-game cash isn’t a huge investment price-wise, but it’s a time-consuming process, stripping gleeful tension from shootouts and replacing them with fearful trepidation.

When fortune’s on your side it’s a different story. In another match, we’re traipsing through a forlorn bayou and happen, by chance, upon another duo, who are completely oblivious to our approach. Taking cover behind tangled tree roots, we manage to kill them and loot their bodies before scarpering to the exit wagon and cashing in the bounty for money and XP. It’s a thrilling encounter, with slow-firing pistols and rifles requiring well-aimed shots and lengthy reloads, but one tinged with the thought that if the roles were reversed, we might be left cursing our antique firearms and screaming into a pillow. 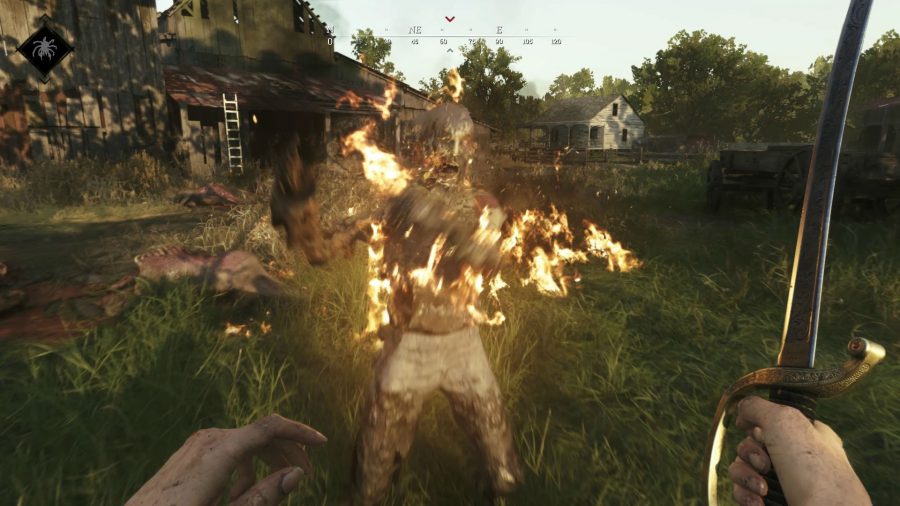 With just one map and three types of bounty monster, the investigative loop of Hunt: Showdown soon starts to strain. Sadly, the two other modes aren’t much better. Training lets you play offline hunts at three different difficulties to earn blood bonds, the real-world currency used to buy legendary gear. While hunts here are replayable, rewards are a one-off, so there’s no incentive to go again.

Quickplay is a solo battle royale of sorts in which players scavenge weapons and activate checkpoints to refill their gradually depleting health. It’s beyond tense. Imagine if PUBG plonked you in an old farm surrounded by walking corpses, distressingly rendered in CryEngine V, with a weapon that takes ten seconds to reload. At least in the main mode they might go after your mate instead.

An online horror shooter packing some suitably devilish details, but slow pacing and cruel penalties don’t give you much reason to return.