Bread’s good. Lovely bread. In fact, bread is probably one of the most unassumingly whimsical things in a kitchen (after, of course, the egg). Far less knowingly wacky than, say, a whisk (and nowhere near as ostentatiously crude as a cucumber) bread remains just fractionally more amusingly mundane than milk.

And what bread lacks in the comic sibilance of sausages it more than makes up for with its single syllable plosivity. Buh. Buh-read. Bread. Blunt and to the point. That’s why bread is funny. That’s why it’s funny to see bread flinging itself around a kitchen trying to get itself toasted. These are just some comedy truths about bread.

I am Bread is a physics based platformer from Bossa, the chaps who did Surgeon Simulator. In it, you control a slice of bread on its mission to toast itself by any means possible. Typically each room contains one or more obvious sources of heat: a hob, a hairdryer, an unattended iron. Getting to the heat is the primary challenge, as it’s also your job to maintain your edibility as you traverse the hazardous environment. 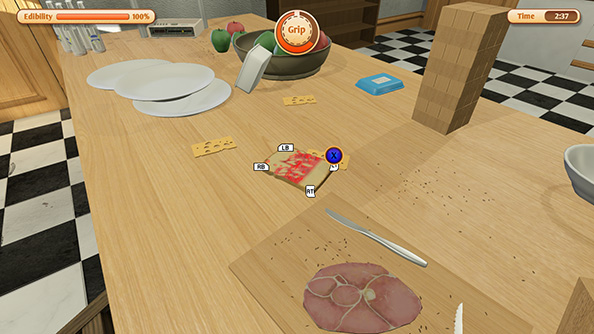 Various things reduce your edibility. Anybody who’s ever eaten bread should be able to tell what they are already: floors (especially carpets), ants and stains, bits of broken glass, essentially anything that would make you less delicious once you’ve been toasted. Walls are fine, as they’re typically cleaner than floors. You’d probably still eat a slice of toast if I’d slung the raw bread against a wall first, right? Well that logic applies here too. I am Bread employs a little common sense in where you, a slice of bread, can and cannot go.

If you do find yourself mired in muck and dirt however, the old five second rule kicks in. Your overall edibility will slowly decline if you’re touching or lying somewhere unhygienic, giving you a short amount of time to get yourself out of danger and back to a cleaner surface. Naturally, you’ll lose some points for this, and ideally you’ll get to your toaster without encountering even a mote of grime. 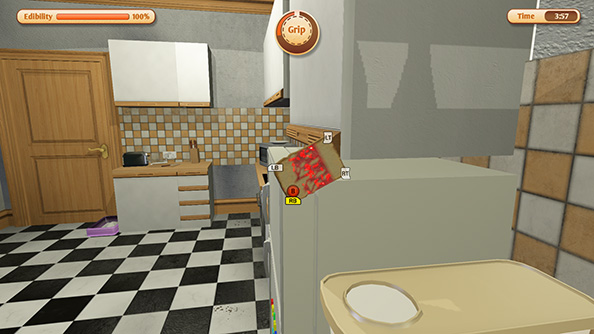 There’s some detritus you’re encouraged to touch, however, in order to make yourself a more delicious slice of toast. Trial and error will assist you as you rub yourself in things like jam and butter (obviously enough) and cereal (less obvious), with each additional smearing of condiment resulting in a bonus multiplier at the end of the level.

Not only do you get points for this sort of flavour enhancing behaviour, but your slice of bread begins to look visually tastier too, with localised coverings of sticky and shiny spreads. You can literally butter your bread on both sides, and be rewarded handsomely for it. A covering of jam will even help you stick to walls more effectively. Again, common sense. 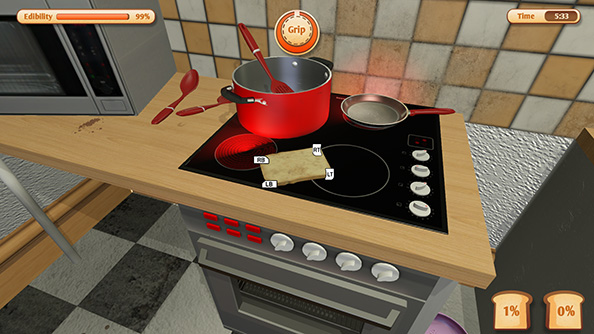 You control the bread by gripping with one or more of the four corners of the slice, which is achieved (as long as you’re sane enough to have plugged a controller in, the keyboard controls are maddening) by pressing the right and left bumpers and triggers. The analogue stick causes your slice to lurch in a given direction, and by anchoring yourself at corners you can achieve a few different kinds of motion.

Grip with the two adjacent ends of the slice and you can flip top over bottom. Grip with just one corner while on a wall and you can swing in the direction of your objective. A grip meter runs down the more you hold on to things, quickly replenishing once you let go. If it runs out you’re forced to fall limp, which is perilous if you’re halfway up a wall. Fail to keep an eye on the grip meter and you’ll find yourself slipping down behind picture frames and falling buttered-side down into cat litter. And that makes bad toast. 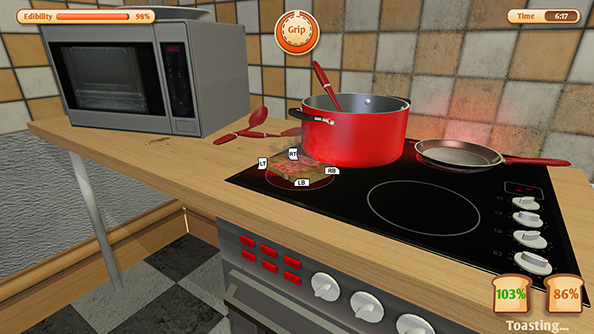 It’s difficult, as you might have guessed. I am Bread is deliberately imprecise and clumsy and, just as with Surgeon Simulator, that’s both the game’s setup and the punchline. Whether or not that appeals depends on whether or not you think we’ve hit peak whimsy with this sort of game. The first release of the Early Access version is very playable, but short on levels. There are four in this version, with more to come, as the starting loaf is moved from room to room by its mischief-suspecting owner: the kitchen, the living room, the bathroom, the bedroom. By the time you’ve cleared all four — it’ll take an hour for a basic run through, without becoming as delicious as you could potentially be — you’ll have easily already had your fill of the game’s weirdness.

In each of the levels the objective is the same. Find the thing that’ll toast you. Get yourself toasted on both sides, all nice like. Stakes are ratcheted towards the ends of these four lengthy treks to the toaster, taking just one mistimed flip of the bread to find yourself spoiled on the rug and forced to restart the level. The variety comes in the kinds of objects you come across. Hairdryers need to be switched on, hobs need their knobs dialled and heaters need buttons pushed. Figuring out how things operate is part of the challenge, and there’s no doubt plenty of Surgeon Sim style easter eggs to be found for players who explore a bit further. 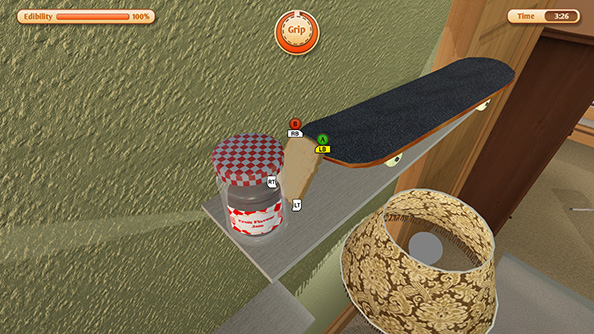 In Surgeon Sim you lost by dropping a bonesaw into somebody’s chest cavity. Falling on the rug in error and desperately scrambling to reach the cupboards before a harsh edibility meter runs out just isn’t as much fun by comparison. There’s a clackety “you are becoming less edible” sound that plays whenever you’re muddying your slice, too, which is a remarkably unpleasant way to fail at anything. The physics engine is prone to going haywire at times too, though that’s fairly chalked up to this being an unfinished version of the game.

So at this early stage, I am Bread is incomplete enough so as to be lessfun than it is simply funny. Bossa are double dipping in the slapstick physics genre, but there’s not so much to recommend with I am Bread as there was with Surgeon Simulator. Its hardwired difficulty setting often leads to more frustration than it does laughs, and it’s difficult to tell how fundamental that is to the game’s design. Floors are always dirty. Falling on them might always mean losing in a way that isn’t very entertaining.

But it might! Because this is Early Access. Bossa are still working on I am Bread and all of the things I’ve just said about it could very well change. As it stands right now however, I would suggest you wait. Take a look again in a month or two and see what you reckon then. You’re the master of your own decisions after all. I literally can’t stop you doing what you like.