If game developers ever call on the ancient muses of creativity, it is probably in a last ditch attempt to come up with another way for an NPC to say ‘enemy spotted’. This, however, is different: a game that pulls not just from the Greek muses but also Plato’s Republic. Even in an era where Mario games are named after Homer epics, the Unreal Engine 4 puzzle-platformer Idearum takes more from the classics than any of its peers.

You play as Eidos – not to be mistaken for the British publishers behind Tomb Raider – a soul striving to reach Atlantis. This journey, however, is as much about growing personally as it is covering geographical ground. To enter the city, Eidos must pass a series of tests as intimidating as any taken at school.

“We based each puzzle on a liberal art,” artist and programmer Andrea Sacchi tells us. “The subjects that Plato was teaching to his students: grammar, logic, rhetoric, arithmetic, astronomy, music, and geometry. We tried to convert these with simple mechanics into puzzles.”

As you can imagine, some of the liberal arts lend themselves more obviously to gameplay ideas than others. Puzzles rooted in melodies or rhythm are well-established in the medium, for instance – but grammar? Arithmetic?

“I know that [Marta Gil, designer], had a very rough time with rhetoric,” Sacchi remembers. “It’s hard to give the feel that a level is logical, or that you are learning concepts.”

Despite that, and the constant iteration the game is still undergoing, the logic phase of the game has turned out particularly well. Its puzzle is built around a combination of sounds and patterns.

“I think it’s one of the best,” Sacchi says. “Developers usually struggle with it, but then kids figure it out very easily. That, I think, says a lot about the game.” 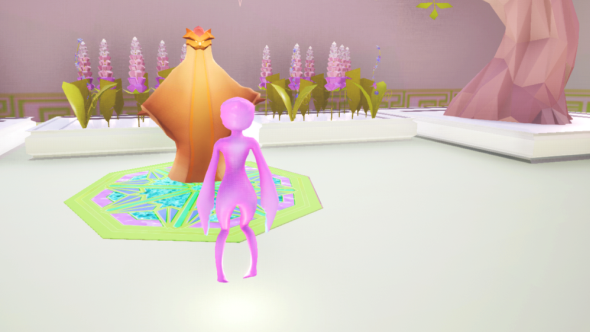 One of the project’s bigger challenges has been the soundtrack. Maggie Bigelow has a decade of experience composing for other mediums but, like the team as a whole, she is new to games.

“I approached it thinking I understand it conceptually, and felt like I composed that way,” Bigelow says. “Then once we were actually putting things together, I realised I made it a little bit too composed – it has much more of a musical arc than I wanted it to during gameplay, and it’s distracting I think. So I’m definitely in the learning curve.”

Embedding that music within the game, so that it secretes naturally into Idearum’s environments, is a work-in-progress too.

“Maggie has done great work with that, she has made everything very loopable,” Sacchi says. “Even though it’s not very well [implemented right now], it sounds great.” 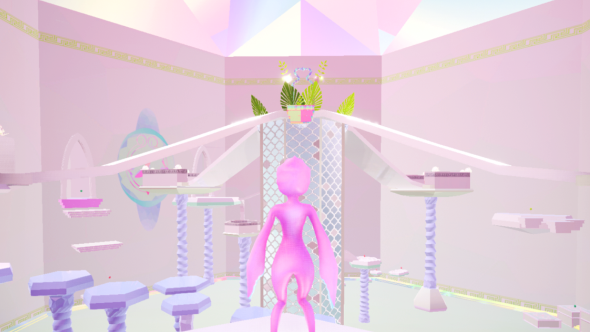 The idea of Eidos and her trials began with Sacchi, but when she pitched it to Prague-based writer and scriptwriting teacher Anna Bobreková, it became “a much bigger story than I would ever be able to do.”

Tahutahu Studios’ remote team came together last year at Stugan – an idyllic-sounding program in the Swedish woods where teams spend two months away from civilisation honing their work. It was there that their story came under pressure as they boiled down the key elements of Idearum. But they made a special effort to preserve Bobreková’s treatment for the game.

“Since we got on the Stugan Accelerator program we had to make a lot of cuts, but tried to keep the story as it is,” Sacchi says. “Since we all loved it and it’s one of the cores of the game, we just decided that we could simplify the mechanics and art in order to put more weight on the story.”

Sacchi’s art style, a low-poly look that pulls from Ancient Greek sculpture and architecture, is designed to be modular. Being able to reuse assets is not only economical from a development perspective – it helps reinforce the themes in Idearum’s plot. 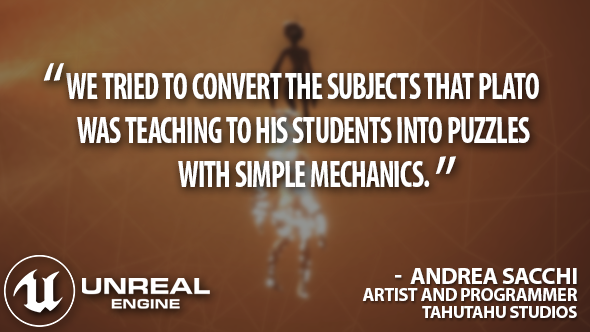 “There is some backstory about the golden city of Atlantis,” Bobreková explains. “We’re trying to implement certain symbols and art from the very beginning, so the player keeps noticing the drawings and wondering what they might be.”

“Using the Unreal Engine it is easier to make prototypes of stuff that works,” Sacchi adds. “You can focus on doing more in story and experiences and not so much on mechanics. That was one of the things that made me choose the engine, and I really like the results.”

You can follow the development of Idearum on the official Tahutahu site. Unreal Engine 4 is now free.

In this sponsored series, we’re looking at how game developers are taking advantage of Unreal Engine 4 to create a new generation of PC games. With thanks to Epic Games and Tahutahu Studios.