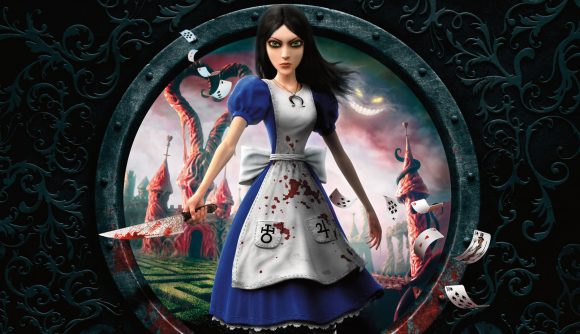 American McGee’s name reached developer Rockstar status thanks to his contributions to Doom and Quake – to the point at which his early efforts as a game director came with titles like American McGee’s Alice. You’d think that kind of name recognition would grant you a little extra leeway when it comes to copyright allowances for your own games, but it seems YouTube has other ideas.

While Alice: Madness Returns doesn’t have quite the same name branding as its predecessor, it does say ‘An American McGee Game’ on the front of the box. Creative director McGee has posted Let’s Play videos of Madness Returns on his YouTube channel over the years, but those videos are now subject to copyright claims.

Though an overzealous bot attempting to monetise an American McGee gameplay video out from under American McGee is absolutely funny, this copyright dispute is actually much more widespread. Besides McGee, YouTuber SidAlpha, IGN’s Mitchell Saltzman, and numerous others have reported a massive wave of claims from a group called Illustrated Sound Music.

The claims are widespread enough that even developers – including Bungie – have had to assure community members that they’re working with YouTube to resolve the issues.

It appears that Illustrated Sound, a multi-channel network that provides content ID services for its members, mistakenly issued copyright claims for content included in one channel’s Let’s Play videos. Whatever the specifics of the mistake, an absurd number of YouTube videos were quickly monetised with Illustrated Sound listed as the copyright holder.

For its part, the company says on Twitter that “we want to extend our deepest apologies for this,” and the claims came as a result of “an internal error” – which the group is now working with YouTube to fix. The company also asserts that the issue is its own responsibility, and not that of its member channels.

I’ll accept that this was all a mistake on the part of Illustrated Sound, but it speaks pretty poorly of YouTube’s content ID system that it’s possible to gobble up the monetisation on this volume of videos in such a short time.