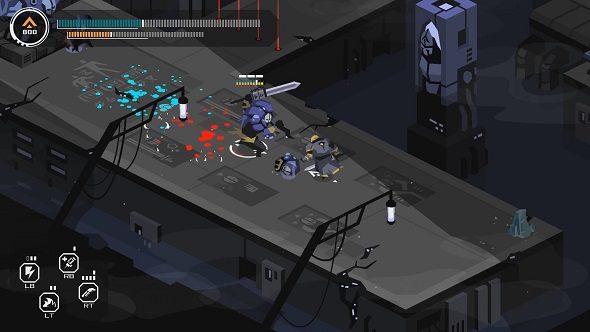 Scheduled to release on Steam this July, developer teedoubleuGAMES have released more footage of their sci-fi Souls-like, Immortal Planet. Tasking players as an eternal warrior who has been in cryosleep for hundreds of years, it’s your goal to fight across this icy planet and uncover the mysteries of your eternal life.

For more instellar excursions, check out this list of PC space games.

In order to combat the strain immortality puts on the mind, denizens of this planet are put on ice to preserve their sanity and allow them some well-needed rest. Waking up from their long nap, the player character discovers that the planet has been overrun by sleepless warriors whose minds have turned to mush after centuries of being awake. Along with the threat of this broken husks, you have lost all memory of your life before your frozen slumber. From there, it is up to the player to uncover the mystery of what truly happened to their planet and possibly then escape from the icy hell-hole.

Being an immortal being, losing all your health in Immortal Planet just means a trip back to cryosleep to recover your wounds. You do lose all your experience on death but like in the Souls series, you can pick it all back up if you manage to recover your body. From its stamina bar, similar UI, methodical combat, levelling system and gritty atmosphere, Immortal Planet seems to be borrowing liberally from the Souls playbook. It even seems to have Bloodborne’s transforming weapons, as seen in the character’s sword switching from a one-handed short sword to a powerful long sword.

Its art style is certainly unique though, melding futuristic machines with ancient stone structures, and focusing on suitably cold colours like blues, greys and purples. The actual Immortal Planet itself is a novel concept, with these eternal beings requiring a centuries’ long power nap in order to refresh themselves. While the mechanics may be all too familiar to Souls fans, at least Immortal Planet seems to be treading new ground in the story and art department.

If this short gameplay teaser has got you interested in visiting this eternal world, Immortal Planet is scheduled to launch on Steam this July.