The gods of Greek mythology aren’t at all pious or well-behaved. They are in fact disastrously messy, causing all kinds of trouble with their mythological dalliances, jealousy, favouritism, and hubris – like if you gave dominion over various aspects of the natural world to the cast of Keeping up with the Kardashians.

One of their most classic japes was that time Typhon, a monstrous giant with dragon wings and a serpent tail, attempted to overthrow big lad Zeus and take charge of the cosmos. Zeus struck Typhon down and banished him to Tartarus, the hellish abyss at the heart of the underworld, and stuck a big mountain on top for good measure. Though in mythology he remained stuck under that mountain, things have gone a little differently in Immortals Fenyx Rising, formerly known as Gods and Monsters. Typhon has ripped a big hole in the ether, so now there’s a hole between our world and the underworld, and Typhon’s looking to take revenge on all the Olympians that were mean to him.

Fortunately there’s a prophecy about a hero coming along to save the day, and it looks like that’s us. The eponymous Fenyx, a Greek warrior shipwrecked on the golden isle of the gods, has been gradually proving her worth and earning herself all sorts of powerful tools blessed by various deities. That’s where I step into her sanctified sandals, looking out over the Golden Isle from a cliff, Daidalos’ blessed wings strapped to my back, and an adorable phoenix companion called Phosphorus wheeling playfully overhead.

The island is split into seven regions, each the dominion of a separate god or goddess. I’m in what was once the realm of Hephaistos, the god of fire, metalworking, and sculpture. There’s a huge forge in the middle of the map, and my job is to get it working again. There are two potential ways to do this. Gliding down from the hill using my magical wings, I opt to reignite the furnaces at the entrance to the forge itself, using a combination of a couple of my heavenly talents: Herakles’ Strength (telekinesis that allows me to move objects from afar), and Apollo’s magical arrows, which I can steer toward my chosen target. 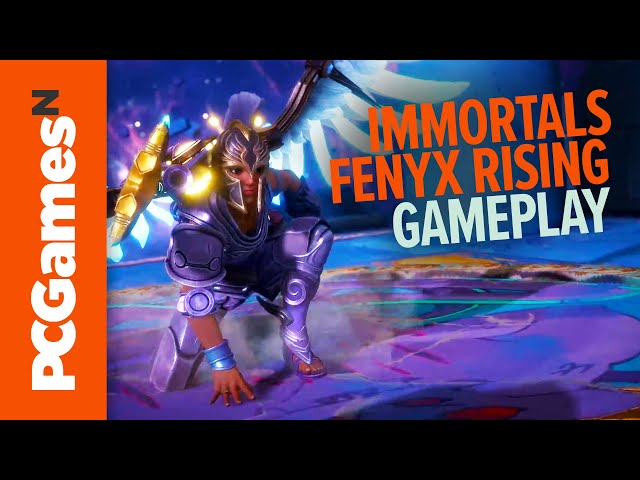 I slash, shoot, parry, and slam my way through mobs of soaring harpies and armoured statues on my way to reignite the forge. I have a couple of standard attacks I can chain together, and then use my stamina to unleash special abilities – mowing them down with a giant shield, or treating them to an almighty smack with the business end of Hephaistos’ huge hammer. The combat is quick and acrobatic; vanquished foes drop blue orbs that refill my stamina meter, so I don’t need to stop for a breather until everything’s dead and Fenyx pants with exertion.

My stamina runs out as I glide, and I float sadly to the ground like a deflated balloon

Aside from the story quests, the open-world map is replete with various challenges that unlock currency, crafting materials, or Zeus’ lightning bolts, which you’ll use to upgrade your power in the Hall of Gods. As I explore, I discover chests guarded by mobs, hulking beasts I’m challenged to tear asunder, and a time trial in which I glide across a divine obstacle course in a race against the clock. This is where my stamina does run out as I glide, and I float sadly to the ground like a deflated balloon. The trick, I discover, is to guzzle blue stamina potions as I boost my way forward. Luckily, potions can be crafted at Cauldrons of Circe using materials harvested from the wild.

Rifts scattered throughout the landscape transport me to the vaults of Tartarus, each containing specialised challenges with a chest of unknown goodies at the end. There’s also an optional bonus chest in each vault for an extra challenge – I pull a lever to activate this bonus task in a trial of strength, and almost get butted into the great beyond by a souped-up bull. 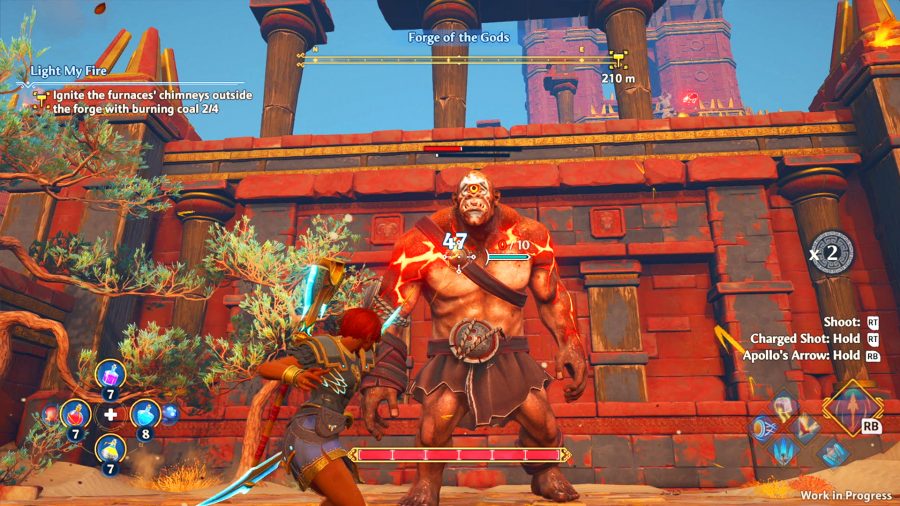 There are also world puzzles to be uncovered across the land; I find a constellation chart to be filled in with giant, glossy blue marbles, which I fish out using my god-given skill in archery, telekinesis, and figuring things out. When I manage to release one of the orbs, it rolls satisfyingly out from under a trellis, like a gobstopper from a gumball machine.

Typhon had a bunch of terrible children (in the fearsome sense, he was probably very proud)

Travelling from landmark to lovingly crafted landmark in Immortals Fenyx Rising is pretty simple. On top of fast travel and the ability to summon a trusty steed, I can climb just about anything (though it does drain my stamina meter), and then swoop and dive from dizzy heights down into beast-infested valleys. Given the game’s working title, Gods and Monsters, I’d expected to encounter a big-name baddie – I beat down some one-eyed giants and snake-haired gorgons, plus a snarling, three-headed hound – but the most formidable foe I face is the huge clanking mechanoid at the top of Hephaistos’ forge. In mythology, Typhon and his wife Echidna had a bunch of terrible children (terrible in the fearsome sense, they were probably very proud of them) – namely Cerberus, the Hydra, and the Chimera among others, so I wouldn’t be surprised to see them pop up somewhere down the line.

With a map stuffed with Hellenistic treats, it’s not surprising to learn Immortals Fenyx Rising comes from the team behind Assassin’s Creed Odyssey, and its open-world exploration, movement, and charming art style invites comparisons with Nintendo’s action adventure game The Legend of Zelda: Breath of the Wild. There’s more than enough Greek lore out there to fill a thousand narratives in this world, and I’m looking forward to more from Fenyx Rising’s cast of quippy gods.