Imperator: Rome feels like a synthesis of all of Paradox Development Studio’s previous work. It mixes the setting and certain concepts – such as barbarians – of its spiritual predecessor, Europa Universalis: Rome, with the more refined empire-building of Europa Universalis IV. The population system from Rome and Victoria returns. Even distant cousin Stellaris has had an influence, in that you no longer have total control over your research – instead, you’ll spend civic power to buying inventions from a menu that is populated at random.

The character system has cribbed some ideas from Crusader Kings II, such as impactful traits that can be gained over time, but jettisoned others, such as every character having an opinion about everyone else. Like the Roman Empire itself, Imperator picks and chooses from its past conquests, taking on the aspects that suit it.

This comes with the expected caveat that Paradox will flesh out Imperator over several years, as the studio has done with its other grand strategy games, and will continue to do as long as gamers continue to buy the results, according to lead designer Johan Andersson. As ever, Paradox is monitoring the community’s appetite for additional features.

The genuinely new ideas here feel incremental rather than revolutionary, but they’re nonetheless welcome. You can manage battles at a more granular level: specifying which troops will meet your enemy first, the size of your flanks, and the stance that will best counteract that of your opponent. But there are new hazards when on campaign, inspired by the hubris of Julius Caesar: put a capable general in charge of a powerful army, and his troops may become more loyal to him than you, which may give him notions and cause his own loyalty to drop. Next thing you know, the general that gave you Gaul is giving you a civil war.

Of pops and borders

To reflect the fact that such things didn't really exist in Iron Age Germania, tribal societies can migrate across borders. You can tell your people to pack up their lives and settle elsewhere. A fluid border system was discussed, says content designer Peter Nicholson, but is both technically challenging and "doesn't bring much to the game" that the returning pops system doesn't.

Some of this is out of my reach in the six or so hours I play, but the scale is immediately apparent. This is a vast map, stretching from Britain to India, and from Scandinavia to Ethiopia. There are 7,000 provinces – now renamed cities – which is roughly double the number Europa Universalis IV managed across the entire globe. Most factions in Imperator are city-states rather than nations, which creates a period-appropriate sense of turbulence – the only available start date is 450 AVC (303 BCE), and Rome is not yet an empire. To the megalomaniac mindset that I and most grand strategy fans share – right? – the hundreds of squabbling cities are practically crying out for a hegemon. It all looks lovely, by the way, with a warm, hopeful colour palette to reflect the fact that Rome is ascendant, as artist Joacim Carlberg explains.

This. Is. Sparta. Welcome!

In terms of user experience – crucial, in complex games like this – Paradox fans will quickly find themselves at home. Imperator is once again real-time with pause, and its UI is familiar in its layout. One welcome returning feature from EU4 is the macro-build button, which offers quick access to some of the most commonly-used actions in the game without you having to go through all your provinces. If that weren’t an option, the business of conquering simply wouldn’t be worth the admin. 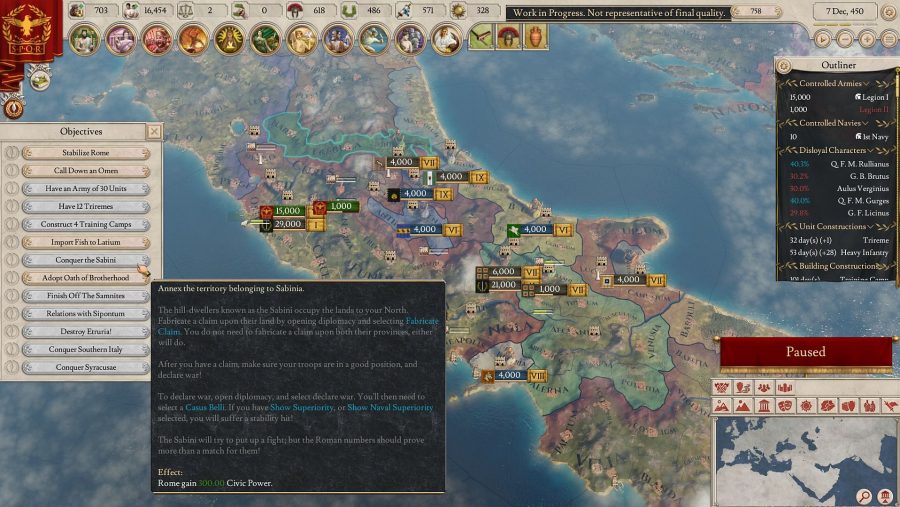 That magic button joins a much slicker tutorial in helping Imperator feel more accessible than previous offerings. Rather than having tips pop up as you haphazardly click around, as in CK2, Imperator’s tutorial gives you a set of objectives to pursue. These are typical of a campaign’s opening stages and introduce you to features both new and old: understand food and trade by organising fish imports; gain your choice of campaign buff by activating a religious omen; use the Oratory resource to rise in another nation’s opinion.

Altogether, I felt like I grasped Imperator’s levers – or at least, the basic ones – more quickly than I did CK2’s. That’s just as well, because the number of levers you’re able to pull at any given moment is often limited. Resource constraints are the most obvious, and the biggest determinant of the difficulty of the campaign you choose to play. As easy-rated Egypt, I wondered if my eyes are bigger than my stomach when I take on the sizeable Nabataean Kingdom, but I needn’t have worried. I have enough gold and manpower to overwhelm them with ease. I even cobble together a reactive but successful defence when their only substantial army manages to surprise me at our southern border. 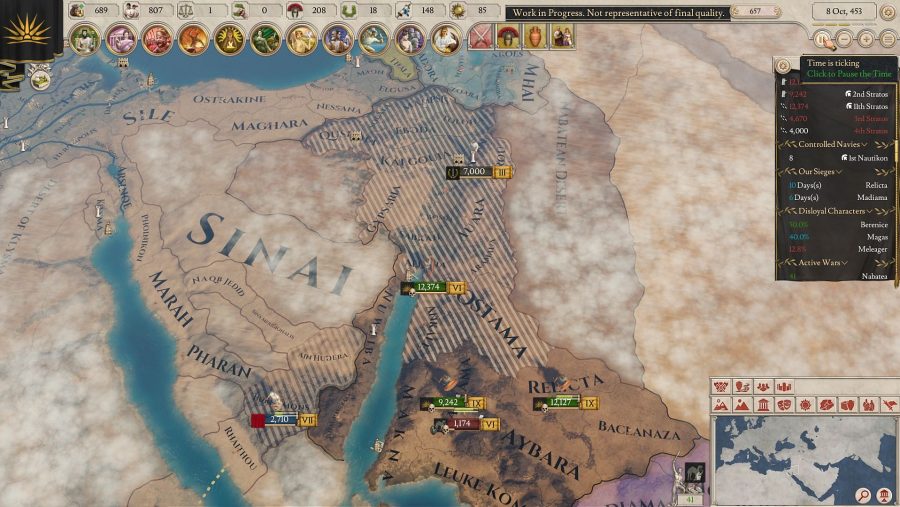 Prematurely confident and seeking a challenge, I ignore the recommended campaigns and pick a nation from the map, settling on a declining Sparta. I almost double my limited territory by knocking over a nearby neighbour, but fabricating a claim on their land exhausts my Oratory (comparable to EU4’s diplomatic power). I can’t risk the instability of starting an unjustified war, so I’m low on options if I want to expand further. Fortunately I’m attacked by several local city-states – thanks to Greece’s web of overlapping alliances – and soon have more than enough wars to fight. But which of my aggressors should I conquer, and which should I appease?

This is a game for leaning back in your chair, eyes narrowed, a hand stroking your chin

My ancient Greek geography isn’t what it should be, so I need to check my enemies’ location, disposition, relationships, and military potential. This means a lot of time looking at information windows, which I look forward to doing with nerdy excitement, but alas – those windows take up most of the screen and can’t be repositioned or resized. This means that when I click someone’s banner to zoom to them on the map, they’re hidden behind a window (which is quite a trick when you think about it). There’s also no function on these windows simply to go one step back, which can be annoying when you’re researching a decision.

The dance of the menus isn’t limited to military planning. Say I’m looking for a bride for my faction leader. I open the ‘characters’ menu to show everyone in my nation (it’s currently not possible to marry foreigners, meaning marriage is no longer a diplomatic tool, which makes it feel far less weighty). My male leader can’t marry other men and I can’t sort characters by gender, so it’s more effort than necessary to identify potential brides. Once found, I click through to their personal screen to learn more about them. You can’t hurry love, as they say, and you also can’t click back to the character menu to inspect someone else. Instead you have to close the whole menu, open the character menu again, and sort the candidates. Again. 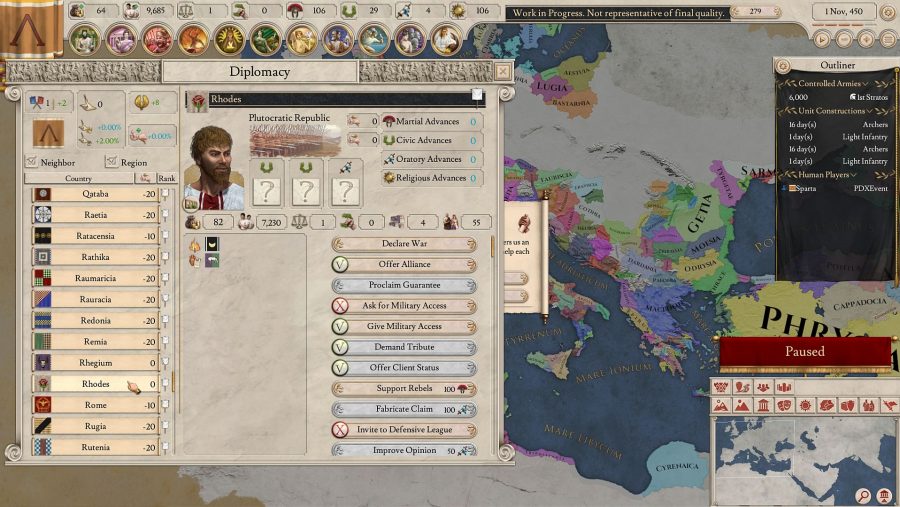 It may sound trivial, but these are deep games with lots of interlocking systems, and making good decisions depends upon investigating their cascading impact. A couple of extra clicks and mouse travel time to glean each piece of information adds up to a lot of unnecessary friction.

It’s nonetheless immensely satisfying when you get one of those decisions right. This is a game for leaning back in your chair, eyes narrowed, one hand stroking your chin while your other roots knowledge out from where it hides, cowering, in the fog of endless menus. An idea snatches at you as information synthesises into theory, your eyebrow raises, your lips curl, and you have a plan.

There’s still room for Paradox to lubricate the cogs in the decision-making process, and to add depth to many of these systems (indeed, we spoke to studio manager Johan Andersson about Paradox’s plans for the game). But even in its current state, Imperator: Rome has melded some of Paradox’s best ideas, and what I’ve played so far is nowhere near enough to see the extent of what already exists. I’ll need – and want – to come back many times to satisfy my lust for conquest.