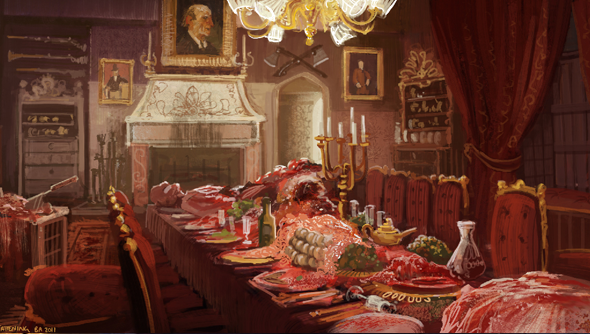 Sad news, everyone. Amnesia: A Machine for Pigs has been delayed. Though for all the best reasons. Originally, A Machine for Pigs was due to be a short experiment in horror game design that was set in the Amnesia universe. Now, according to recent update put out by Fricional Games’ Jens, it “is no longer what we had first imagined, but a fully fledged Amnesia game. A different kind of Amnesia, but definitely not a short experiment.”

More on the game’s development below.

Work on the game has been completed by thechineseroom, the indie developer behind Dear Esther, and they’ve sent their final version of the game over to Frictional. Though it’s still not ready for release, Frictional want to test and tweak the thing until it meets their exacting standards before releasing it into the nightmares of the general public.

Frictional are hoping to have the game out on release in Q2 of 2013. So, some timebetween the start ofApril and the end of June.

All this talk of experimentation has me intrigued. Previously A Machine for Pigs had only seemed like a development of Amnesia, another adventure in the game that made so much of the internet piddle itself; an expansion, like what we had in the old days. This talk of it as a small experiment makes me wonder what thechineseroom were working on, what foul beast they had slope out of their minds.

We’ve little to go on, just this old trailer from Halloween last year: