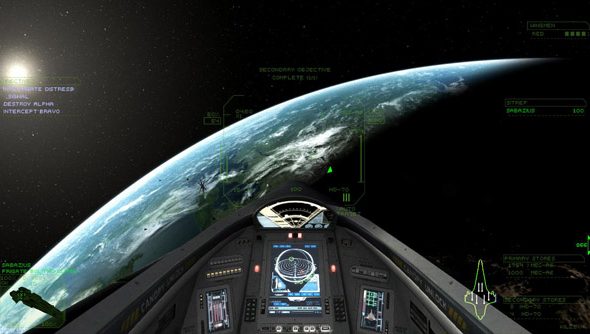 I’m a man of simple pleasures, I want to fly a space fighter through the centre of an intergalactic battle, chasing an enemy fighter between two warring capital ships, each flinging flak at one another like it were wedding confetti – violent, exploding wedding confetti – and yet these uncomplicated desires are largely unfulfilled by the gaming market. There was a time, back in the 80s and 90s in which such things were possible. There were games like Tie Fighter, Elite, and Freespace, but for some reason publishers got bored.

So, it’s been a joy to spend the last week playing Diaspora: Shattered Armistice. You should download it now. It’s free after all.

Based on the remake of Battlestar Galactica, Diaspora is a mod for the Freespace 2 engine. It’s taken the team four years to prune the technology, pack it up with faithful recreations of the ships from the series, and develop a mission editor that will let the community make more content for the current, slim release.

If you’re a fan of Battlestar, quite simply, they’ve got it just right. They’ve stripped out all that fleshy relationship business and quasi-religious rot, and left the series’ real draw: the mechanically perfect space combat. They’ve captured that sense of awe evoked by vast capital ships battling each other with their heavy guns and nukes, whilst gnat-like Colonial Vipers and Cylon Raiders dart about in between.

And, if you weren’t a fan of Battlestar, throw the series out of your mind, because what you have here is a pedigree shootfest, set in the darkness of space. The one thing that you ought to know, which carries over from the series, is that the Viper has the nifty ability of being able to flick off its rear thruster and change its orientation with a set of pressure jets that line its fuselage. What this means is that when you have a Raider on your tail, you can tap ‘W’, turn 180 degrees, unload a few rounds into the Toaster’s face, flip back round, re-engage your thrusters and fly on your merry way as your foe breaks up into a ball of flame behind you. It’s a neat little feature which you won’t use much at first but as soon as you get the hang of it you’ll feel like a hero.

That’s what Diaspora does. It makes you feel heroic. You are in a minuscule, single-seater fighter in the vastness of space, and you are outnumbered and outgunned. It means that when you get that final hit on a Baseship, turn about and head for home, hitting the after-burner to get out of the blast radius, you get that satisfaction that the a series depicting these battles could never give you.

It helps that it looks as good as it does. Despite being over 13 years old, the Freespace 2 engine looks fantastic; particularly the skyboxes. Many of the missions are set in the orbit of planets, some are a beautiful Earth-like blend of greens and blues, and others are scarred and pitted grey rocks. Whatever the case, they stand stunning backdrops to skirmishes. All this praise said, the game has a few flaws. These are mainly when the curtain is thrown back on this show: clipping issues letting you fly through the outer arms of a Baseship, or seeing level elements spawned and stationary on the outer edges of a level waiting for the script to “jump” them in to the action, and, most annoyingly, one level has you try to destroy the subsystems of a Baseship to disable it but nothing I fired at it seemed to do a thing.

It’s main weakness is that there are only six missions and a tutorial. Though, the variety of the missions, and the included editor, will hopefully tide us over until the next campaign is released – and hopefully it will include the Viper Mk II, which is sorely lacking in this release.

It would be silly to focus on the flaws though, because Diaspora is an unforgiving, thrilling space fighter, the like of which we haven’t seen in years. And, in a time where license-infringing mods are being swatted off the internet faster than lawyers can file their invoices, it seems a minor miracle that it was ever released. And another miracle that it’s this good and free.
You can download Diaspora: Shattered Alliance here.