Way back in June, Bossa Studios, the folks behind Surgeon Simulator 2013, added a cryptic sticker to the base of a Team Fortress 2 figurine that appeared on the game’s reception desk. What followed was the fevered investigative work of thousands of sticker-solving internet detectives, who later uncovered a series of further hidden clues: phone numbers that could be dialled on the in-game telephone, secret post-it notes left by unseen girlfriends, and, ultimately, a six-digit keycode that unlocked a top secret alien autopsy.

Through brute force, and in just a matter of days, the keycode was cracked. But only later did players figure out the significance of the numbers that they had stumbled across, and not before they’d exhausted every other possible crackpot theory they could conjure up. Were Bossa hinting at the start of a Steam Sale? Or, as so many people genuinely believed at one point, were Bossa about to announce Half-Life 3?

For three days in June, everything was possible. Nothing was real.

“The day after we released the first piece of the puzzle,” says Surgeon Simulator 2013 co-creator Luke Williams, “we had to put our foot down and say, look, this isn’t Half-Life 3. But people wouldn’t believe us! They’d say things like, ‘well of course you would say that, wouldn’t you’. We were damned if we did and damned if we didn’t.”

The rampant speculation about a Half-Life 3 announcement was exacerbated by the initial clue’s coincidental appearance in a Team Fortress 2 themed update to Surgeon Simulator 2013, as well as its use of the Korean language, which coincided with the addition of a Korean language pack to Half-Life 2.

And the furore didn’t escape the attention of Valve themselves. “We had a couple of curious emails from them,” Williams explains, “all along the lines of ‘hey guys, so what’s all this we’re hearing about Half-Life 3 being announced?'”

“Obviously we’d been in communication with Valve to release our Team Fortress 2 update,” says Bossa’s Tom Jackson, “and the first clue came as part of that update. Valve were very understanding about the confusion though, I think they know better than most how carried away some players can get with this kind of thing.” 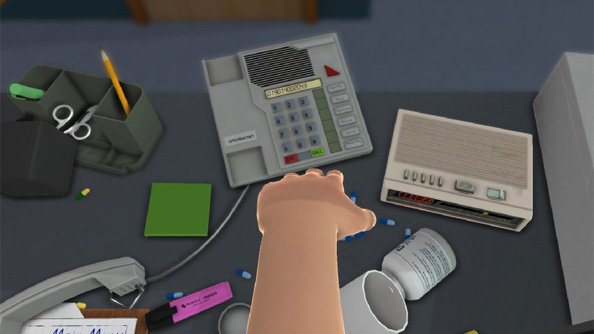 The speculation became so overpowering that Bossa had to take steps to distance themselves from the notion that their puzzle had anything to do with Valve. “The clues we were inserting were a hint at our next Surgeon Sim update,” says Williams, “which is why it appeared at the end of our most recent update, which just so happened to be Team Fortress 2. You get a little figurine of the Medic for completing that DLC, so we thought it made sense to put the clue to our next DLC there. The problem became clear when people didn’t think we were hinting at our next DLC, they thought we were hinting at the next Half-Life. So we ended up having to move the clue elsewhere on the reception desk to remove the association.”

While part of the keycode — the ultimate answer to the puzzle — was discovered by diligently following the clues, the rest was discovered by entering every remaining possible combination of digits into the in-game keypad, one after the other.

“It was never something to be solved by one person alone,” says Jackson. “If we’d had tens or hundreds of people on the case, they never would have figured it out. But we had half of Reddit on the case, so we saw some insane solutions bouncing around. What we didn’t foresee was them brute forcing the keycode. Once they had the middle two digits, it was orders of magnitude easier for them to solve by entering every possible number they could.”

But just knowing the answer isn’t enough for an internet detective, they still desperately wanted to crack the puzzle itself. “They figured out that the last two digits of the code were 45,” Jackson explains, “but they still couldn’t figure outwhythey were 45. It drove them crazy.” 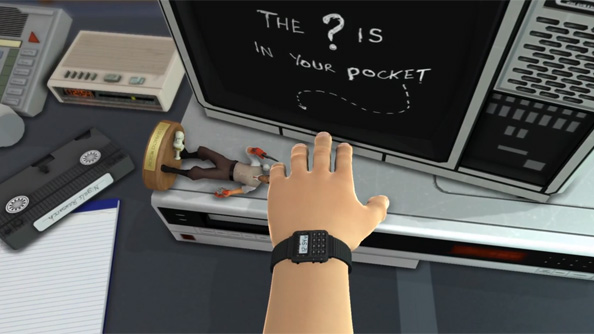 The clue to the answer ’45’ was found on a VHS cassette that was itself unlocked by following earlier clues. Once inserted into the menu screen’s tape player it displayed the message “the answer is in your pocket”. It was this cryptic conundrum that confounded the ARG-solving task force. “They were trying to look inside the surgeon’s pockets in the game,” Williams smiles, “which you can’t do because we only modelled the surgeon’s arms. They’re floating in space. But they tried anyway, they were asking anybody with an Oculus Rift to look down and check to see if there were pockets.”

“Not that we’d ever make a clue exclusive to the fraction of a percent of players with an Oculus Rift,” adds Jackson. “Some people on the forum came agonisingly close to figuring it out though. I remember one person said, ‘maybe we need to think about what’s in our own pockets’, and I almost leapt out of my chair. He was on the right path, but he was totally ignored. It was torture to watch!”

So what was the answer? It had everything to do with what’s probably in your pocket this very second. “The answer was your own mobile phone,” reveals Jackson. “You had to dial your own phone number from the in-game telephone on the reception desk, and then your actual mobile phone would ring.”

The internet eventually figured this out themselves, but it had been a bigger stumbling block than Bossa had ever anticipated. “We thought it was obscure, but not too obscure,” Jackson continues. “People couldn’t make the leap in imagination required to consider dialling their own phone number from within the game. Nobody makes that assumption for some reason.”

Even if you figured out that you had to clumsily tap out your own telephone number, there were still a few more steps before reaching the answer. “When you answered the call you’d hear a recording of a woman’s voice,” explains Williams, “before hearing a series of tonal beeps, some high and some low. If you typed out those coded beeps as ones and zeroes, and translated it from binary, you’d get ‘nine times five’, which is 45. That’s your answer.”

But what of the mistaken assumptions made along the way? Across forums and community hubs, players were making serious logical backflips to arrive at insane theories about Summer Sales and Half-Lives. At one point, the sticker that began the clue hunt was even believed to be a map of North Korea.

“They edited the levels in Photoshop and sure enough, it looked a lot like the coastline of North Korea,” laughs Jackson. “It was just some weird texture compression, a total fluke, but it was hilarious how people would come up with these convoluted theories. The answer to that sticker was simply ’29’, the number of years it takes Saturn to orbit the sun and first two digits of the keycode, but people ran with it.

“Saturn is linked to Saturday, they theorised, and the first two letters are ‘SA’. The first two letters of ‘sale’ are also ‘SA’, so they reckoned that the Steam Summer Sale would start on Saturday, June 29th. We had none of these ideas in our head when we came up with this puzzle, we were just hinting at a keycode!”

As the mystery unraveled and the final digits became clear, the wackier theories died off and the alien autopsy revealed itself. A gobbleshaft transplant on a little green man, Nigel’s greatest challenge yet, was the prize after all. Reddit relaxed its battered clue-glands, the internet simmered down and Half-Life 3 retreated to its rightful position as king of vapourware.

“They did get it eventually,” smiles Jackson. “And the first person to solve it was on our forum, so we’re very proud. Kudos to that guy.”