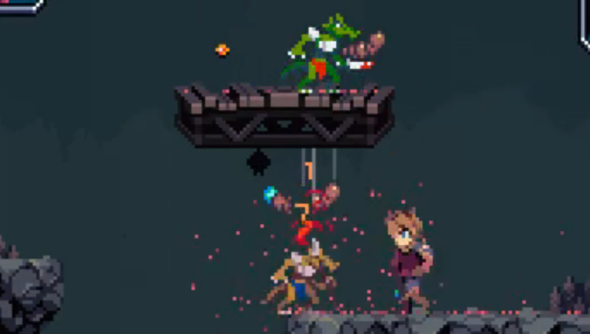 Taking notes from Castlevania, Metroid, and other games that have yet to make it to the PC outside of ROMs, Chasm is a 2D side-scrolling action-RPG. In other words, you hit lots of animals till they explode in loot, all while looking at the side of your character’s face.

If neither of those descriptions illuminated you to the game’s content then thankfully there’s a demo which you can play.

Now for those of you who aren’t au fait with gaming history, a demo is what developers used to release before selling you their game, it let you gauge whether it was awful or not before paying money. Naturally, developers got wise to this and stopped releasing them.

Chasm’s demo is not awful. It’s awful-ly hard but it’s a lot of fun.

It’s really only a brief sliver of a game which is still in development, one which won’t escape from development without your help (yes, it’s another Kickstarter).

The core of the game is a procedurally generated dungeon which is capped by a small town populated by weapon, armour, and potion sellers. Your play will be made up of regular excursions into the deep, dark mines, seeking out loot drops, greater fame, and adventure.

Currently, with 27 days of funding left, Chasm is $37,000 on the way to its $150,000 target. As it’s a pretty polished project, and one which you can play already, it looks like it will probably get funded. You can pitch in to help out here.

Hopefully we’ll see more Kickstarters supplying demos of their work because, while it would be lovely to have publishers start releasing demos again, or at least a means of playing the game in some form before buying it, a Kickstarter is much more of a faith purchase than a finished game. The developers are asking you to pay them money for something they don’t even know will be completed. A demo, even just one that’s a vision statement, is a great tool for securing confidence in a project’s potential.