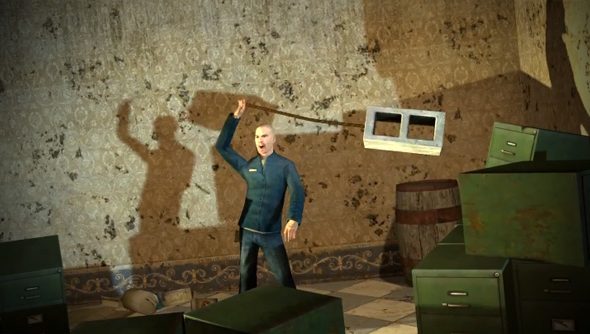 More hot virtual reality news, this time from the simmering brain-pot of one Garry Newman, who’s busily updating Garry’s Mod to support Microsoft’s magic motion-tracking Kinect hardware. What that means is: you’ll soon be able to plug a Kinect into your PC, allowing you to control ragdolls using nothing but your own flailing limbs and body. You kick, Judith Mossman kicks in real-time. You do the mashed potato, Alyx Vance does the mashed potato in real-time. You can even push and touch and manipulate objects in the world using your slightly creepy motion-controlled avatar. Garry’s given us a video of the Kinect-enabled Garry’s Mod in action. It arrives either this week or next.

Garry has also blogged about the process of adding Kinect support to GMod, which involved some interesting and spectacularlyghoulish mis-steps along the way.The Kinect controls will also work in multiplayer, Garry promises, meaning friends can finally dance in real-time with one another.

As with pretty much any GMod update, this is bound to become more exciting, and more intensely creepy, as soon as the community get their hands on it.