The trouble with Goat Simulator is that it’s actually not as terrible as you might expect. It is a bad joke, carried well: an open world anarchy simulation in which you can headbutt, lick and occasionally wear jetpacks, breaking stuff for high-scores. It is full of ideas, and even if those ideas are mostly stupid, they are still ideas.

Occasionally while you are competing against your Steam friends in an in-game meta-mini-game named Flappy Goat, it is a little bit profound. Occasionally, when you’ve managed to get your goat stuck between two physics objects, and his face is vibrating back and forth at what seems to be the speed of sound, you wonder whether the joke was worth the effort. 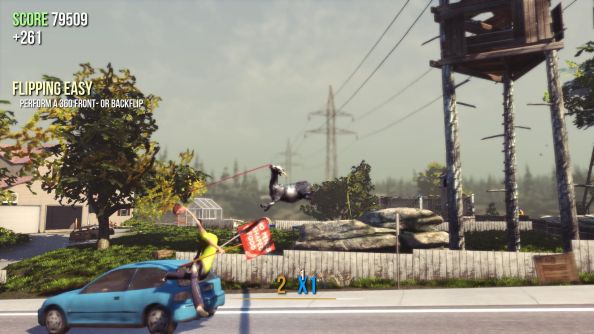 So: you play as a goat, and you have a few square kilometres of carefully set up, dangerously about to explode situations to roam through. Here is a giant teetering boulder at the top of the hill. Here is a party at the bottom. If that goat were to headbutt that boulder…

Points are earned for destruction. Combinations occur as you chain moments of devastation together. Occasionally, you will earn extra bonus points, because the developers think that plastering MICHAEL BAY over the screen as a petrol station explodes is funny.

It sort of is. 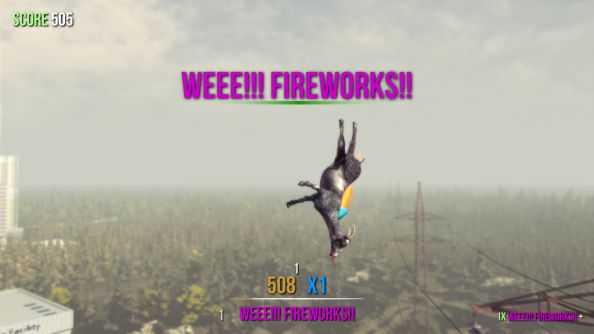 I often feel a tinge of disappointment with games that are built following an engine demonstration. The demonstrations start with amazing scenes of items knocking into items; chaos created out of maths. There is the fragile hint of possibility: that with this piece of tech, we’ll be able to do new and interesting things. Then, reality appears. That glorious soft motion physics engine is just another checkbox bolted onto a corridor shooter.

Goat Sim sort of is the game you want developers to create off the back of their fancy physics tech. And it reveals the limits of “wouldn’t it be cool if…” as a design motif.

To call Goat Sim unpolished would be to be offer praise it doesn’t deserve. This is a game built in a hurry, and it’s all kinds of broken. It doesn’t crash, but it does have all the physics bugs you can think of, and some new ones you didn’t dream possible. A goats legs should not do that. A man’s torso should not be contorted in that way. 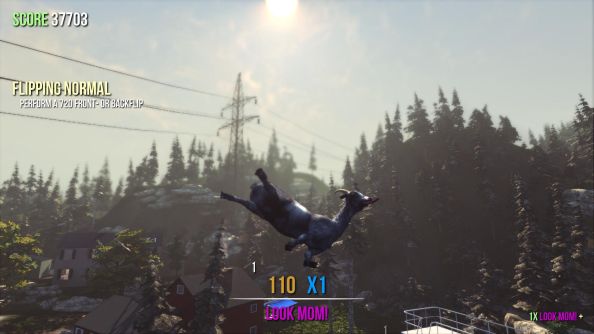 But there is some interesting design. There are challenges: little mini-games that have to be defeated on the route to a high score. A goat wrestling ring. A murderous pentagram that must be fed with corpses/unconscious ragdolls. A goat version of Flappy Birds. There is stuff to do, and just as each joke wears thin, it stops.

Here’s the thing. I can sort of appreciate Goat Sim, but it leaves me a little cold. However, I showed it to some pre-teens, and they thought it was the greatest game they’d ever seen. Their sides still hurt from laughing.

I wonder if, accidentally, Goat Sim might be one of the best kids games going: an ungulate enhanced remix of the Lego series, that proves that breaking is at least as fun as building.

It is hard to feel mean about a game that inspires that kind of reaction.