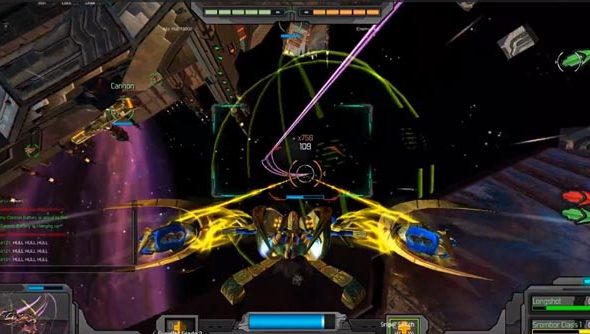 All my niche interests have been catered for this year*, I’ve had mech games aplenty in the form of Hawken and Mechwarrior, ultra violence in Hotline Miami, and space, well, space has been a treat: Diaspora, FTL, Star Citizen, XCOM, everywhere we look new space games seem to be on the horizon.

There’s still room for something else though – after all space is really, really big – a multiplayer spacefighter combat shooter explosion video game. GoD Factory: Wingmen may be it. Check out the early footage below.

It’s extremely colourful, which is a good thing; The ships are wickedly angular, which is a great thing (very reminiscent of the N64’s Lylat Wars); and the particle effects are like something videoed through a kaleidoscope.

One hangup does seem to be the targeting system. That aiming box takes up a good chunkof the screen, meaning if you can see an enemy ship it will auto-aim at it. I’m not necessarily asking for the pin point accuracy of a crosshair but something requiring a little bit of a finer touch would be nice.

You can read a little more about the game over on the developer Nine Dot Studio’swebsite but there’s not a great deal to go on other than the video, they’re very early in development and plan on making the thing look a good deal more pretty before release but other plans aren’t stated.

*There is still a woeful lack of an 18th century tea and gossip simulator.