It took all of six seconds before my astronaut engineers began screaming for their lives.

Habitatis an unusual game. It is a space-sim of sorts that raised $50,000 on Kickstarter last month. You are the commander of a space-station in construction – owner of a rag-tag band of floating engineers. The world has ended, nano-probes have wiped us out, and one consequence of that is that your orbiting space station is surrounded by junk.

There are railway carts. There are the orphaned remains of Sputnik and Skylab. There are chunks of the Eiffel Tower, and a floating ICMB and I’m almost certain I spotted a dog in a spacesuit. The Statue of Liberty was definitely there.

Most of that junk is useful. Some of that junk has rockets on the end. Your engineers can be sent out to retrieve that junk and bolt it onto your station, growing it, providing power or sensors or radio contact. Eventually, you will add engines and a grappling hook a radar dish and maybe even lasers. 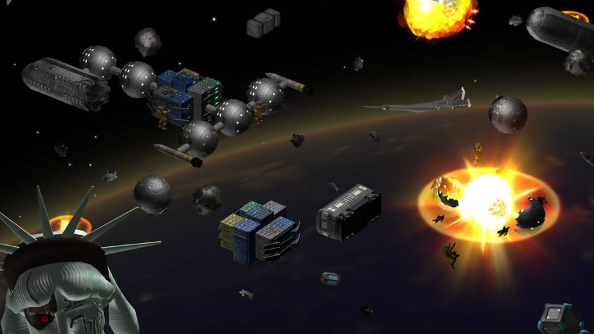 But you’ll need to learn to drive.

That’s where it goes more than a little pear-shaped.

Habitat exists in a 2D plane, with zero-gravity. And it’s filled with rubbish. You need to move your station to new areas to harvest, and to get there, you’ll have to fire the propulsion you’ve bolted on to your ship. Firing them up is easy. Controlling the burn rate so that you’re not immediately sent skittering through the atmosphere is very, very hard.

Hence, the comedy Gravity scenario. Habitat is a slapstick space-simulation – its world reacts like a billiard table, festooned with space debris. In over an hour with the game, I barely felt I was in control of my ship. But I couldn’t stop giggling.

Habitat is a slight game: there’s not that much too it right now – just . It will launch on Early Access soon, with Steam Workshop support, allowing players to create and upload their own debris. Missions, in which you build stations and then fight AI opponents will follow. There’s talk of a multiplayer mode, but nothing confirmed.

I think it’s really rather lovely.

Even if the screams of my engineers will haunt me. For a while.