Loading Human is an Oculus Rift powered adventure game in which you play a novelist with Alzheimer’s whose fractured memories are being uploaded into a computer by his Nobel Prize winning scientist wife. To enable his fraying mind to be transferred to a hard disk, he must relive his memories one by one, piecing together his experiences and burrowing through his tattered virtual brainscape.

Not content with simply dropping you into the Oculus Rift’s convincingly projected version of reality, Loading Human also employs the use of Razer Hydra, two handheld nunchuks whose positions in space are tracked by a clever motion-sensing, desk-mounted orb. Together with the virtual reality headset, they allow you to move and use your hands inside the game world, picking up and interacting with objects in a genuinely disconcerting way.

Here are some things that make your brain involuntary convulse when playing Loading Human. The first time you hold your hands up to your face. Though they’re not even clenched into the fist shapes your real hands are making as they hold the controllers, your brain all too readily accepts that these hands do indeed belong to you. Seeing your own shadow projected on to a wall is also jarring, all stiff and with hands raised up like a mantis. It places you bodily into the apartment in which the game’s opening takes place.

Picking up a phone and calling a number, you instinctively raise it to your ear to listen, and feel the hair-raising shiver of the object’s audible proximity to your face. When inserting a key into a keyhole, you don’t consciously explore your mind palace in search of the door marked “how keys work”, you simply twist it anti-clockwise without instruction, because you’ve used a key before. These bits, the parts where the combined technologies of motion control and virtual reality work in tandem to convincingly delude your brain, are special indeed, a demonstration of how when traditional barriers to interaction in games are removed, all sorts of things become intuitive. To pick up a thing, you pick up a thing.

It’s not perfect though. Things can go haywire. Your hands can sometimes become confused about where they are, spasmodically lurching about the screen in horrifically contorted shapes. You use the single button input on each controller to grab objects, but again it’s imperfect and sticky without the fine motor controls of your real life fingers. You can pass an object from hand to hand – in one puzzle you neatly slide a vinyl record from its sleeve, which is strangely satisfying – but it can all go a bit Surgeon Simulator at times, as you fumble and drop things comically.

With some patience, practice and the occasional recalibration of the controllers, it’s possible to navigate and interact with the world smoothly enough, though there’s often a debilitating and unintended disparity between your inputs and the results that appear in front of your eyes as your hands seemingly betray your brain. It’s strangely apt, then, that Loading Human deals with disability in its plot, when it could also serve as an analogy for motor neuron diseases too.

Moving around the virtual apartment meanwhile is achieved by pushing the left thumbstick, while turning on the spot is controlled by the right thumbstick. It’s these gliding movements that generate the medium’s problematic motion sickness, as the disparity between in-game motion and real-world stillness duke it out in your bowels. Movement is slow too, to mitigate disorientation, which makes you feel a bit like a sad ghost plodding through a world built out of intangible light. 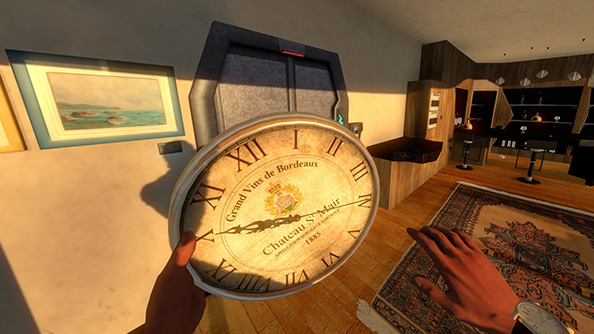 When playing I was made to place my bum against the back of a chair to root myself in place, to stop myself from getting too excited while opening a virtual door and inadvertently tumbling out of a real second-storey window. What a death that would be, to fully believe you were standing perfectly still in a stranger’s apartment, daintily turning a vase around in your hand in search of clues, only to all of a sudden feel the sensation of wind buffeting your skin, a powerful and mysterious gravitational pull towards one of the apartment’s walls and then all of your bones crumpling in a violent, confusing and life-ending instant. They should probably put a warning label on the Oculus Rift.

That’s how Loading Human feels to play (not the falling to your death bit, but everything before it). Beyond that, the puzzles themselves are straightforward enough. Listen to your wife’s clues to objects placed around the apartment, pick up a clock, turn it over to retrieve a key taped to the back, place a record on a record player, touch the sides of a cube in the order they light up. One bizarre puzzle involves dragging a dead woman’s limp body, by her wrist, to a nearby hand-scanner. It’s comically undignified – especially given the impossibly skimpy black outfit the designers have stuck the poor girl in – and hopefully something that’s tidied up or worked around in later versions. Maybe give her a jumper and stick her on a trolley instead.

The player next to me, whose stomach couldn’t handle the sometimes nauseating experience of using the Oculus Rift, opted to instead play Loading Human on a regular old monitor. Stripped of the sensation of existing within the 3D space that the headset brings, the game becomes a fairly standard, even unremarkable adventure. Instead it’s the dual utility of Hydra and Oculus that makes this game so remarkable. It’s the reason you’re reading about it, yet also the reason so many will presumably be unable to play it. 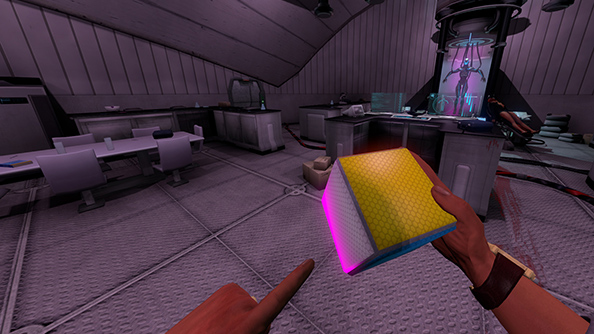 It’s hard to imagine virtual reality headsets and motion-tracking controls becoming a feature of the living room setup any time soon, but ambitious and immersive experiences like Loading Human continue to capture imaginations regardless. There’s perhaps a place for games like this, right now, at public events and expos, as a sort of analogue to a cinema experience instead of a game to be played in your own home.

Loading Human doesn’t really fit into a mould – even its ‘Eternal Sunshine of the Spotless Mind’ meets ‘that one episode of Doctor Who’ plot is unlike much else around it – and that’s why there’s such interest in where it’s going and what it’s doing. The associated risk of being so mould-averse, of course, is that Loading Human becomes something esoteric and exclusive to the select few people invited to come try it out. You can watch the trailer, but to really appreciate the novelty of the thing, you need to have it beamed into your eyeballs through Oculus Rift with a couple of glorified Wii remotes strapped to your hands. Not many people are going to be able to do that and will feel left out, justifiably so.

It’s flawed just enough in its technical execution that you’d be cautious to call this a step forwards for virtual reality gaming. It’s a step in some positive direction, at least, and a showcase for the sort of things that might be possible after a few more generations of the technology the game employs. It trips over the limitations of the hardware is relies on, but when it works, when the physics plays nice and your hands behave themselves, Loading Human presents the most convincing and intriguing virtual reality experience I’ve had in Oculus Rift.