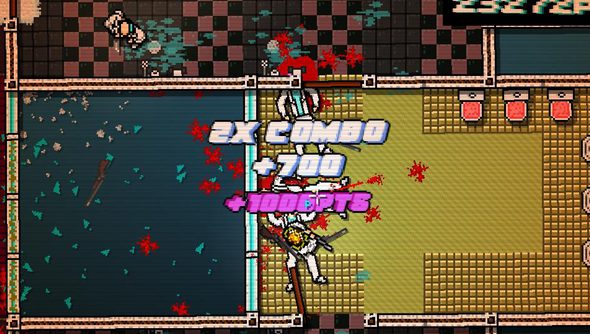 Hotline Miami is a top down, ultra-pixelated, ultra-violent, ultra-stylish brawler that requires precision and skill, and it is so much more than that description can ever approach. There’s an electric thrill that runs down my spine when I play Hotline Miami. All that oozing neon that pulses and flashes and slowly dissolves my brain in the acid bath of violence and throbbing synths that make up Catcus’ first foray into the commercial space.

You enter a level. You kill everyone. You leave. And you do it in such a way as to wrack up as many points as possible. This is Super Meat Boy interpreted through the eyes of a psychopath, with the same try, fail, restart, try, fail, restart cycle, only this time everyone is dying in vivid red splurts of blood.

Every level starts with a choice. You pick which animal mask to wear. There is no in game purpose of these masks. They do nothing mechanical. They have no powerups, and no stats. It’s just a mask. Just the terrifying visage that will be your victim’s nightmares for decades to come. That is, if anyone survives. If you play right, that isn’t something that’s going to happen.
Because the aim of Hotline Maimi is to kill everyone in a level in the most stylish, varied, fast and ridiculous way you possibly can. Left click punches, a quick jab that knocks enemies over and stuns them for a few moments. More importantly, it flings any weapon from their hands, having it clatter to the floor, fair game.
Right click picks weapons up. Right click throws any weapon in your hand, hurling it across the room to knock any enemy in a line on their arse, flinging any weapon from their hands, having it clatter to the floor. Right click picks weapons up. Space bar, then, grabs enemies. Executes the ones on the floor, executes ones standing up. Grabs any that can serve as a human shield, providing you have a smallish gun in your hand that you can hold with just one, blasting away while your enemies blast at you.
That’s the systems of the game. Everything else is experimentation, and refinement. Which is the beating neon heart of Hotline Miami, in the same way it was the meaty centre of Super Meat Boy’s pulpy mass. You start a level, beat up some dudes, die, hit R to Restart and you’re instantly back at the beginning. It’s so fast, and so painless, that you’re straight back in it, running through your routine, correcting mistakes, and making it perfect.
There’s a little randomisation, in the placement of weapons in the level, and in your enemies’ hands. So sometimes the knife that you relied on when you played it last won’t be there. But importantly, once you start a level it’s locked in that configuration. It’s only when you come back to it that things change, once you’ve powered down the game and fired it up again.
I’m nearly five hundred words into this preview, and I haven’t talked about the reasons why you’re doing any of this. Why it’s called Hotline Maimi, even. It shouldn’t matter, really, in the same way that it shouldn’t matter why you’re running over civilians in GTA, or why the ghosts want to eat Pacman in Pacman. But somehow the Cactus’ words creep in under your skin, and I’m actually caring about why I’m being called up in the middle of the night with a request for babysitting some unruly kids on my voicemail. Which, you might guess, is a euphemism for cracking some skulls with a baseball bat. Each level becomes increasingly complex, requiring more and more perfect runs to complete, and after all of that you get a score. For variation. For combos. For executions. For speed. It’s nonsensical. It’s brilliant.
Hotline Miami is going to be this year’s Indie Smash, a game that’s so utterly independent that there is absolutely no way it could come out of anything but a single man’s mind. The music is brought in from other sources, emulating the cool that permeated the film Drive, only instead of Ryan Gosling moping about before driving a car pretty well, it’s a psychopath mopping up gangsters while wearing the Don Juan Horse mask.
I know which of these has kept my attention for upwards of five hours so far. And it’s not Ryan Gosling’s reserved demeanor.
Hotline Maimi should be out sometime in September, with a demo imminent. We’ve got an interview with Cactus, the game’s developer, here.