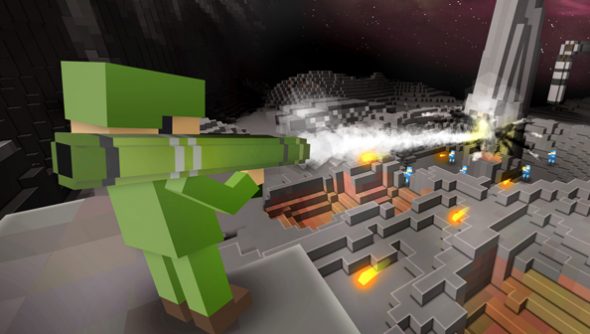 When we last wrote about Guncraft, apparently omnipotent PCGamesN reader digital_pariah pointed out that it “sounds like Ace of Spades Plus”. We didn’t have the foggiest what that was, but at the time chunky FPS AoS had already garnered a following of around half a million active players a month.

That’s according to Cambridge Runescape devs Jagex, who have been working with a “handful” of indie developers to get the game ready for a full Steam launch in December.

Jagex describe the game as an mashup between Minecraft and Team Fortress 2, though in the event it winds up being something entirely different. Ace of Spades flings 32 players into a sandbox map, dividing them into two teams and various different classes. It then has them build bunkers and defences of their own devising, or dig tunnels to sabotage their way to victory.

“If you’re tired of the same old first person shooters, coming out year after year with a fresh lick of paint and a hefty price tag, then Ace of Spades will tick all the boxes for you, offering an all action multiplayer featuring up to 32 player FPS combat and a fully customisable environment which will continuously develop throughout your battle.”

Despite the studio’s decision not to publicise the game’s existence until now, Solari continued, its prototype release has already played host to a little over 2.5 million players.

“Ace of Spades is set to take FPS to the next level, adding evolving tactics and strategy to twitch FPS gameplay. We have blended the artistic style of voxel-based sandbox games, such as Minecraft, with the class based combat of titles like Team Fortress, and added an extra dimension with real-time evolving battlefields to create a game which we firmly believe will appeal to FPS gamers looking for a bigger challenge.” Come on then, readers. What do you know of this Minecraftian shooter we’ve been missing?