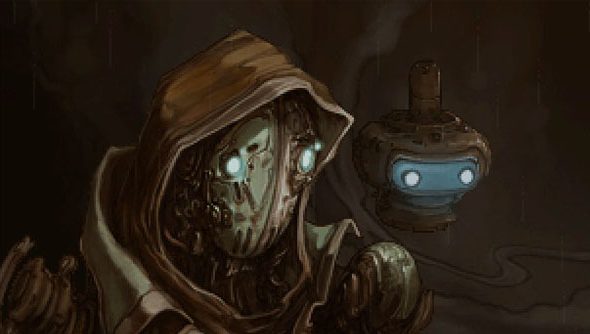 Before the development of pointing and clicking, early Humans were unable to indicate dangers that were “Behind you!” or keep time in musical street gangs, thank goodness for the invention of computers. Early gaming was swamped in point and click games, stretching the walls of what was possible, teaching the world to indicate and make noise with their fingers.

Then it all stopped. Except in Germany.

Though, as was prophesied by Pointus Clickus, the genre would rise again in the second decade of the third millenium and enjoy a new age of popularity. Primordia, with its robots and its puzzles is one such of these games to be enjoyed. See for yourself in the trailer below:

Coming at us sideways through Dave Gilbert’s Youtube channel:

If you’d not garnered from the trailer, Primordia takes place in a world peopled by robots, people having been left behind long ago – unable to keep pace with the brilliance of machines. Understandable really, earlier today I caught my flatmate shouting at the toaster for burning the toast even on its lowest setting. Silly flatmate, it’s trying to starve us out.

Primordia’s launch trailer may be a llittle pre-emptive, however, as the game is not out till 5 December.