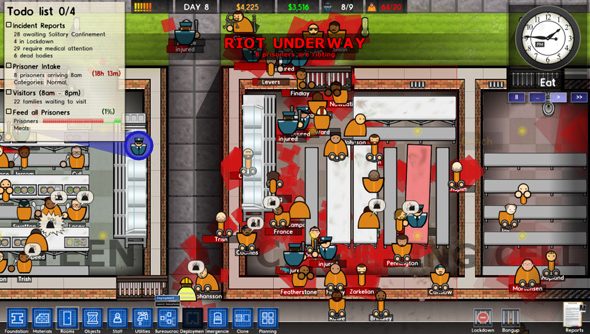 The extent of my understanding of how the insides of a prison work comes from a half-remembered episode of Porridge, the opening scene of Blues Brothers and the time I stood outside a women’s prison as a young child and realised that women can do crimes too, so many crimes, in fact, that we have to build entire prisons exclusively for all the crime-doing women.

Prison Architect is just about as mind-broadening an experience, a game about building a prison (beginning work the day before your first batch of inmates show up, because videogames), planning out cell blocks, balancing budgets, arranging schedules, maintaining peace, quelling unrest and thwarting escape attempts. It’s a not-even-nearly-finished Bullfroggian gaol-management sim that, despite still being under heavy development, is currently available to purchase and play on Steam. So should you? Would you? Well, that all depends.

Here’s how Prison Architect plays, right now. You’re given a plot of land and a metric wodge of cash with which to build a prison. About a dozen men found guilty by a jury of their peers turn up once a day expecting the bare minimum of care afforded to them by the state. You can click on them to see their criminal records, but you have no direct control over their movements. Instead you plot out the foundations of buildings, which a team of workmen then construct, before designating functions to the rooms you’ve made. Hastily cobbled together holding cells will accommodate a few prisoners while you construct dozens of smaller individual cells. Showers must be hooked up to plumbing, cooks must be hired to work in kitchens, cafeterias must feed prisoners, guards must open and close locked doors in order to escort inmates, staff and visiting families to and from their destinations.

A 24 hour clock ticks along, turning the day to night, with your prisoners adhering to a configurable schedule of sleeping, eating, yard time, work time and free time. The idea is to construct things in such as a way as to keep the largest number of inmates moving efficiently between their cells, showers, laundry rooms, workshops, yards and back to bed, all while keeping the system secure enough to detect smuggled contraband and deter escapees.

Accountants and psychologists and security chiefs can all be hired and supplied with furnished offices to unlock new menu screens and information about your prison population. You can take on government grants, which offer you a cash advance in exchange for meeting certain criteria: house a certain number of crims, build a medical wing, employ some chefs, that sort of thing. Currently, those few grants are the only hard-coded objectives to pursue, and there’s no reason not to take on every single grant immediately and use the money to do whatever the hell you want.

Besides these grants, Prison Architect is a sandbox balancing act in which happy prisoners require costly amenities and unhappy prisoners will eventually riot, using contraband weapons such as screwdrivers stolen from workshops to stab up their fellow incarcerated. It’s a virtual delinquency ant farm in which you tread the line between your prisoners’ happiness and the prison’s efficiency and safety. Set up metal detectors and order extensive searches of every cell and tensions will rise, but neglect to de-shiv your inmates in favour of a feel-good prison atmosphere and those happy prisoners will end up all stabbed to bits in a bodybag.

In practice, the mechanics of prisoners stealing and hiding contraband or becoming disgruntled by the rehabilitation process is obfuscated by the game’s clunky UI. Fights will break out, but they feel rather more the result of your vague and crappy decision making than the outcome of some clever game systems interacting with one another. In a future update, prisoners will be able to concoct elaborate escape plans by stealing tools and digging tunnels (currently they’ll make a break for an open exit, should they spy one) but right now, their frantically paddling cleverness is hidden somewhere beneath the game’s surface, like tiny AI duck-feet. 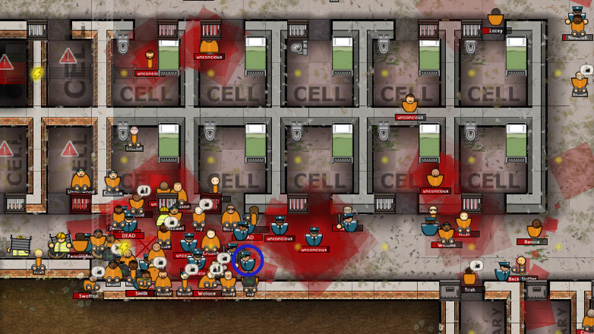 There are more basic problems too, such as the confusing way in which foundations are laid, resulting in walls where you don’t want them and — far more concerning in a prison builder — lacks of walls where you absolutely do not want a lack of walls. You can learn the intricacies of the unpolished UI and navigate around the oddness, but swathes of Prison Architect feel (and still are, let’s always keep in mind that this is an alpha) placeholder by their nature. Objects still get stuck in doors, workers brick themselves up inside new buildings like they’re in a Jonathan Creek murder mystery, an entire branch of the bureaucracy tech tree does nothing.

That’s sort of the point, however. Introversion are more than aware of the embryonic state of their game, and there’s a clear caveat on the Steam store page explaining that Prison Architect isn’t finished. The idea is that you either report bugs to Introversion to help out with development of the next update, or patiently wait for a subsequent, improved and expanded version of the game to release. If you’re undecided, it’s important that you understand your role before you hand over your cash. With Prison Architect you’re a tester, not a consumer. A taster, not a diner. Prison Architect is unfinished, raw and difficult to swallow, like a hunk of uncooked prison cafeteria turnip. 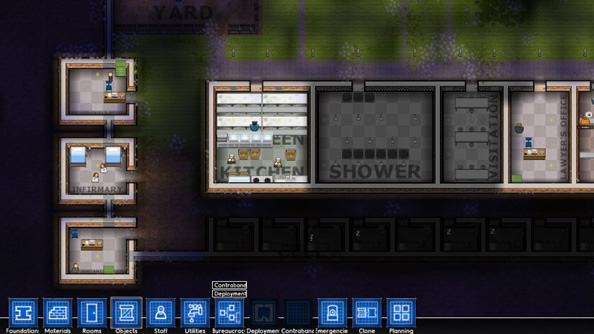 If you’re the kind of person who would move into a house while it’s still being built because the process of constructing floorboards so fascinates you, then maybe the Prison Architect alpha is for you. New versions come thick and fast, overhauling the game, gutting features, adding new ones, knocking it down and rebuilding it so regularly that Prison Architect often oscillates between Frankensteinian mess and the rudiments of a proto-Theme Park quality prison builder. Catch it on a good build and Introversion’s ideas and goals will ring clear, encounter it on a off-day and you’ll struggle to see past UI bugs, wonky prisoner behaviours and unfinished or unstarted game mechanics.

Introversion are not shy about advertising Prison Architect’s in-progress state however, and their promise to you is that you are directly funding the ongoing development of the game with your purchase, in exchange for monthly updates and, eventually, a copy of the finished game. If you’re opening your wallet with a view to grappling with the alpha you’re agreeing to come along for a rough ride, to sit in the kitchen while your dinner’s being made. Depending on how you play and appreciate games, their development is often not an enjoyable process to be involved in. At best, you’ll endure a deflating parade of bugs and design-holes on the way to receiving the full game. At worst, seeing Prison Architect without its make-up on will erode your eventual enjoyment of the final product.

Prison Architect is available to purchase at Introversion’s website, as well as on Steam. It’s priced from £19.99. Also, why the heckins are we reviewing unfinished games? Here’s why!