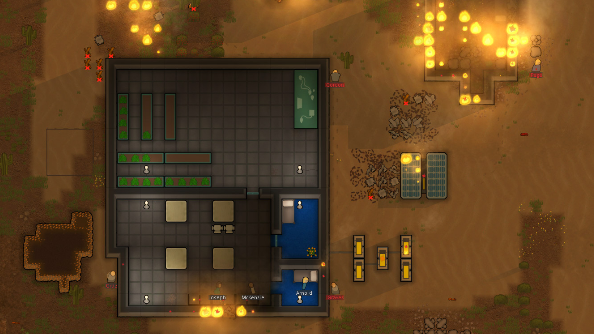 Canadian Kickstarter recently became a thing, and that thankfully means the most polite nation on earth can now campaign for our money. One of those lovely people is Tynan Sylvester of Ottawa, and he’s making RimWorld, a sci-fi colony simulator influenced by Firefly (AKA the best sci-fi show in the known universe). An AI-driven storytelling system drives the whole thing, producing an emergent narrative that molds to your gameplay.

The RimWorld Kickstarter is in its final hours and has passed its goal. It will be made. Permission to engage excitement drive is granted.

So who is this AI Storyteller then? Well it’s actually three people (or digital programs if you’d rather shatter the illusion) that work much like the AI director from Left 4 Dead. Essentially they’re RimWorld’s equivalent of difficulty modes. Choose Cassandra Classic and you’ll get a typical game arc, with easy elements to begin with, gradually building to massive tension and desperate disasters. Phoebe Friendly on the other hand offers a more SimCity approach, designed to offer a more relaxed atmosphere and the tools for successful colony growth. Randy Random mixes both these elements together to create a dynamic, unpredictable experience.

Alongside the settlement and colony building elements, combat plays a significant role. With the Firefly inspiration in full force, the setting is old-west style, so firefights are to be expected. The game uses a system akin to Jagged Alliance for tactical combat, with a full cover system.

The project is fully funded now, with the $20,000 goal far surpassed with over $230,000 raised. Just over 24 hours still remains on the clock though, so you can still donate your share to help fund the project if this seems your game fantasy come true. The team have played roles in the creation of BioShock Infinite and Prison Architect, so we expect good things from this one.

To pledge your cash, head over to the RimWorld Kickstarter campaign page.