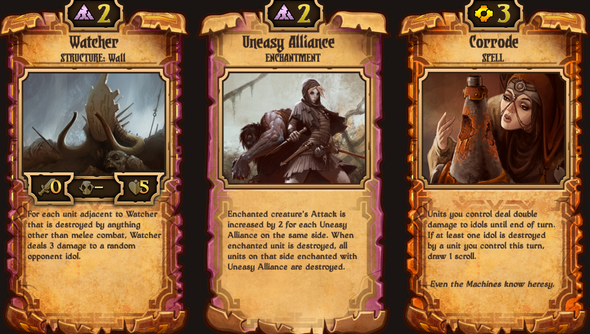 October is an exciting time to be a Scrolls player, since a massive update is on the cards. Headlining the update is forty brand new scrolls, including new creatures, enchantments and structures. Alongside this will be new modes and tools, as well as a little bit of extra customisation.

The new forty scrolls can be seen over on the Scrolls blogin all their detail, but those scraps of parchment are not to be trusted yet. Nothing is set in stone and things may change before D-Day, so these are indications of flavours for now, not full recipies.

The update will see the introduction of the new Judgement mode, which offeres a rather different style of play. Rather than use your collection, you’ll have to build a deck from randomly selected cards, and then battle for victory in a series of five matches. The random scrolls mean you get to check out abilities you wouldn’t have in normal games, and allows you to try tactics that are unavailable to you with your own deck. Thus Judgement is an excellent levelling mode, and everyone could do with levelling a little more.

Spectator mode will be along for the ride too, which does as it sounds. Players looking to pick up a few tips from the pros can spectate matches of their friends or the highest ranked players on the servers, and those looking to show off can let people watch them lay down the pain.

The update is due sometime in October.