I can see two bright red, horizontal cones between the pines. Like the brake lights of a tiny car, they burn through the fading dusk light along a route roughly parallel to mine. They belong to a robot returning fruitlessly from a fire I lit in the beer garden of a deserted pub less than 200 metres away. And we’re now converging on the same point.

I own an axe that’d make short work of these trunks, but nothing that would safely bring down a bot without the element of surprise. And so I move slowly but deliberately through the trees, willing my invisible legs to carry me faster – but unwilling to resort to the distastefully noisy sprint key.

I reach the clearing with a few seconds to spare – just enough time to duck down next to a small crater, stuff a still-steaming dark blue macguffin into my bag, and resume my walk along the same trajectory. 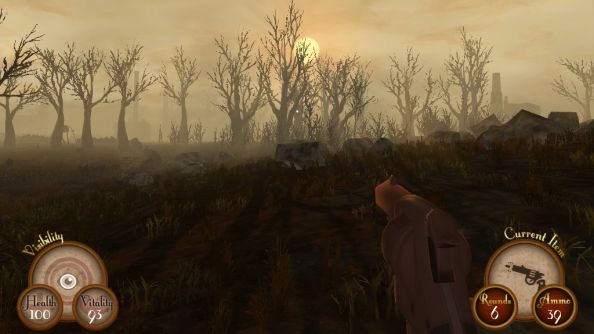 I’ve been heard, but not seen. I leave this bot’s neck of the woods with repeating monotone barks reverberating in my headphones, like Bilbo escaping Gollum’s clutches in the Misty Mountains. Looking up ahead I spy a church – very real salvation. And on my scanner, the far-apart radio blips of another distant object.

This is Sir at its best: a generator of high wire near-collisions, born of half-made plans made in a world built for you and you alone.

You begin Sir as one of those scientists who tests all of their wares on themselves. Your first brush with teleportation hasn’t gone particularly well. You’ve been stranded on the archipelago – that is, a cluster of five topologically varied, randomly determined island biomes – and must collect all of the scattered pieces of your device if you’ve a pheasant’s chance in hell of returning home.

That means creeping about a nightmare rendering of idiosyncratic Britain. You’re equipped with next to nothing by default, and so can expect to scavenge weapons and survival tools from nearby villages and pubs. 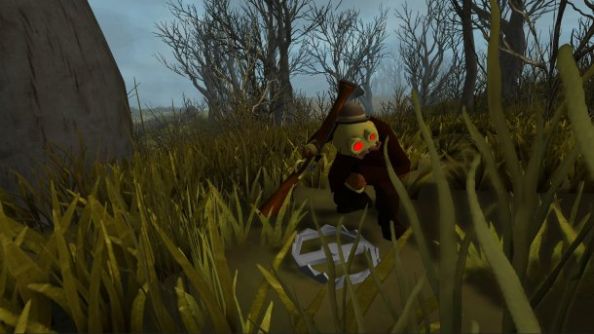 Hunger is an ever-present worry, as the only way to keep your health regenerating and yourself unstarved is to remain well-fed. And all the while, you’ll need to avoid playing grouse to an inventive array of paranoid androids. These blunderbuss-armed aristobotic landowners ramble across the landscape, or lie in wait, and come programmed with all the complex search behaviours you’ve seen in proper stealth games. They’d consider your panicked demise jolly good sport.

Open combat with them is not only uncouth but undesirable – an all-too-easy-to-follow recipe for serious bleeding only curable with valuable bandages. It’s simply not done.

There’s no respite. Not really. Once in a while you’ll stop and listen for bleeps and bloops and only hear the robotically granular but nonetheless comforting twittering of the game’s birds. But that church I found won’t provide shelter, per se. Buildings in Sir don’t have interiors. 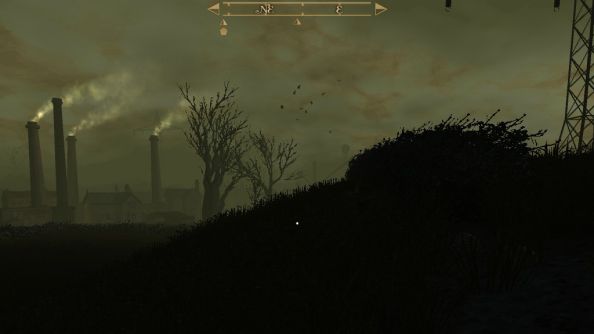 It’s an unusual design solution in an open world survival genre more often preoccupied with geographical simulation. But you’ll soon come to understand that in Sir (or Madam – a binary button on the main menu allows you to switch gender), a house is not a house. Rather, each door is a tombola: an inventory screen filled mostly with mouldy bread and green eggs, but redeemed by the occasional shotgun.

Sir subscribes to the ethos of RPG item management fondly referred to as ‘inventory tetris’. You’re given a finite grid of squares and an unpredictable range of items of dramatically varying sizes and values to cram into them.

With no levelling or inherent skills, you are the contents of your backpack. So choosing what to take with you and what to leave behind is a continuous, nail-gnawing toss-up between pragmatism and aspiration. An empty blunderbuss is lovely – but oughtn’t you really take a couple of extra bandages and a bot-distracting glass bottle instead? 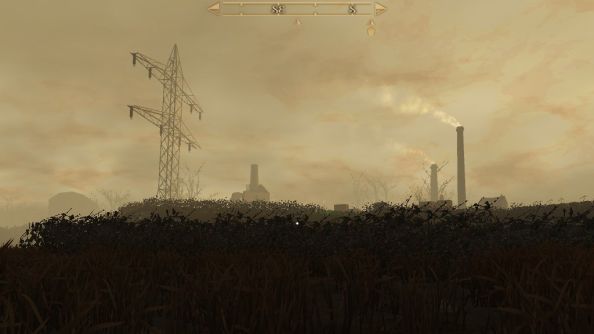 Where Sir differs from its inspirations, however, is in incorporating the aspect of Tetris everybody else forgets: time pressure. In this game, item rearrangement is carried out against a backdrop of ever-vigilant synthetic gentlemen. You’ll tend to find that greater rewards are matched by greater risk: villages and pubs promise a colourful array of gear, but also attract large congregations of hunters.

That’s especially true in the radius of those mysterious objects you’re looking for – parts of the teleportation device that explosively disassembled itself immediately prior to the game’s opening. Some pieces are jagged splinters that’ll slot nicely between two hunks of meat in your bag. Others are hulking geometric lunchboxes you’ll likely have to chuck out something desirable to carry. But you won’t know which until you get there, and find yourself trying to tidy up your belongings before the guards you’ve briefly distracted return to their posts. 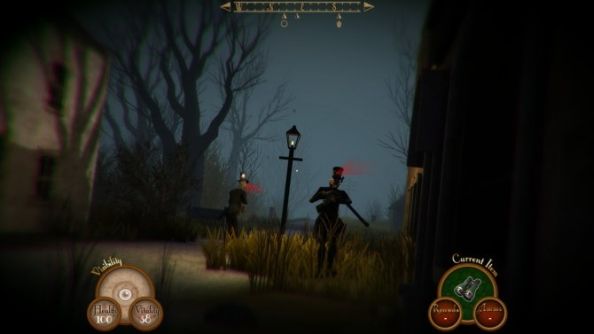 Sir is not short of distraction tools. Beer bottles can be hurled elsewhere to keep bots from uncovering your position; alarm clocks can be set on short timers to make a racket while you, heart thumping, relocate to another vantage point; toy trains can be sent trundling into the woods, luring nearby bots in after them. Combine one of those tools with a bear trap, say, and an axe, and you have the makings of a plan that twists the bots’ behaviour programming to your own ends.

But save points are found only at the boats that transport you between islands and the central standing stones you return the macguffins to. That scarce checkpointing leads to real tension – at the inevitable cost of higher than average quantities of frustration. Unless you’re a being of incredible patience or an Operation Flashpoint veteran, you’ll conduct more than a few second runs at already-conquered botspots at high speed. Item and enemy placement seems to be determined before you step off the boat – so you’ll know vaguely what you’ll be facing and where. But you’ll also be aware that you’re not playing the game exactly as it’s meant to be. You’re mopping up – and that’s one chore beyond bag-packing Sir fails to make fun.

Those moments are symptomatic of Sir’s larger problem: it doesn’t hold up quite so well in long stretches. The singular simplicity of its goal – find and retrieve the missing piece, and the next, and the next – has allowed Big Robot’s efforts at open world design to stand up alongside thousand-team projects in AAA. 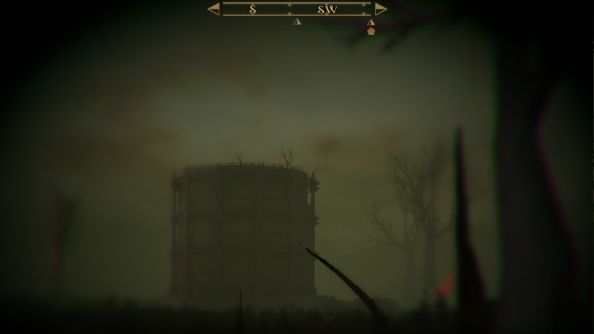 But oddly enough, it turns out we miss the overstuffed questlogs of those Skyrims and Far Crys – NPCs to backtrack to, a main quest to ignore, and a point somewhere beyond the horizon we’re repeatedly distracted from reaching.

By the time you’ve recovered your umpteeth and final teleporter part after ten hours or so, you’ll have exhausted every means you can think of to divert or dispose of a couple of enemies marching around a plume of white smoke.

That’s a shame, because Sir’s world deserves to be revisited. Beneath the feet of its cynical villains lies a romanticised rendering of the Victorian countryside that’s only heightened now the game’s hit version 1.1. The new custom biome generator will readily produce forests denser than Sherwood and mountains more extreme than any in Cumbria – and the ability to wipe the game of all NPCs but the wildlife can turn Sir into the rambling sim it half wants to be. 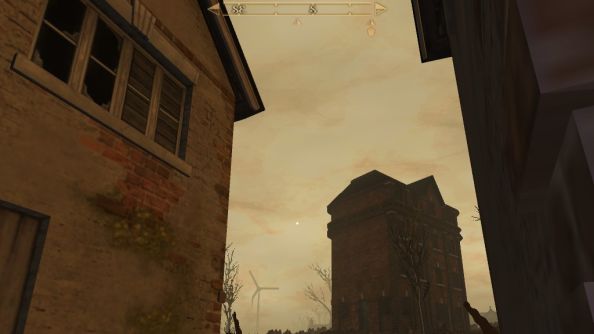 Its tone is encapsulated in the unseen, gulping Dorothy L Sayers manservant whose apologetic voice drifts uncomfortably between comforting and mocking. His reassurances that you might survive this after all, madam, are somehow more sinister than the robots’ assertions of the opposite.

That knack for gently nudging English oddness into threatening territory shows up in the sharpened whimsy of Sir’s village nomenclature (Odd Eating, Lesser Dangling), and in its world design at large.

Here, the stark pylons and abandoned shopping trolleys of contemporary Britain rub up alongside the dark satanic mills and tweed evil of its past – just as they do in the real country, living under austerity measures but still subsidising grouse hunting. 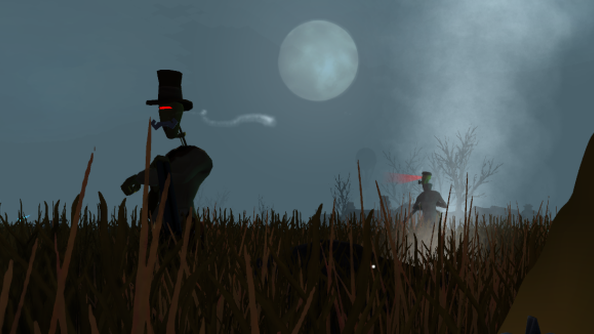 And if that sentiment rubs you up the wrong way, take it as a warning – Sir is deeply political in a way games rarely are. But from time to time it’s also endearingly silly.

Of the rare letters found in Sir’s randomly-generated treasure troves, a personal favourite is a missive written in all-caps by the robots, to the relative of a homeowner forcibly moved out prior to the game’s events.

In what’s clearly intended to be careful imitation of a doting parent, the androids implore the letter’s subject to return to the archipelago. But their clumsy impersonation of human fondness falls down in the postscript, when they ask the recipient to consume the letter after reading to destroy any evidence. 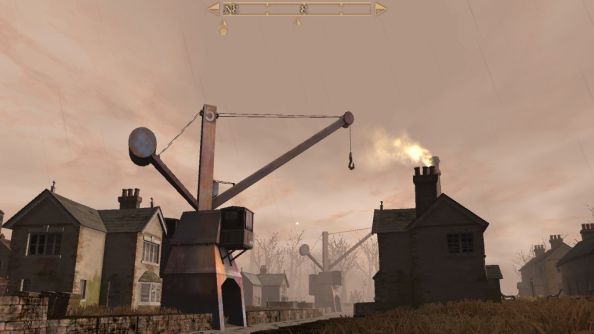 It’s a farcical moment that some players will never see, and stands in brilliant contrast to the game’s otherwise unending hostility and bleak worldview. It’s hard not to be saddened there are so few other avenues for that full-frontal silliness to shine through – but to build more would compromise Sir’s ethos of show-not-tell, which it pulls off so expertly elsewhere.

A good portion of Steam’s top sellers list is now regularly composed of open world survival experiences – but there’s not one aspect of Sir, You Are Being Hunted you’re likely to find replicated exactly in another game.

By the end, most of its sights and systems will be all too familiar. But between its uniquely provincial setting and dedication to undergrowth stealth, there’s more than enough novel in Sir that you’ll gladly be the rabbit in its lights at least one time through.