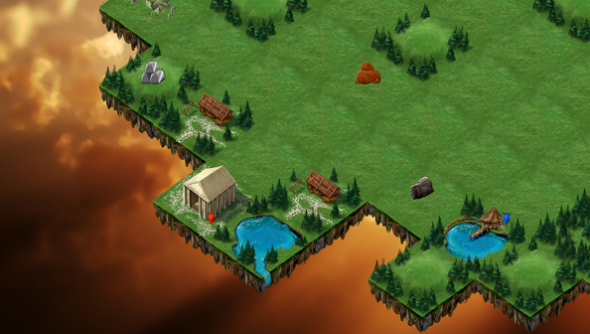 A skyward collapse of anything seems more terrifying even than conventional toppling. Inevitably, there’s so much further to fall. But actually, Arcen Games’ new project promises to be their least chaotic yet, if you’re playing it right. As an omnipresent denizen of the clouds, you’ll use familiar strategy mechanics to prevent factions from beating the resources out of each other.

“Set high in the sky atop a floating landmass that you are actively constructing as the game progresses, you oversee two warring factions (Greeks and Norse),” says Arcen’s Chris Park. “Via solo play or co-op, you play as ‘The Creator,’ helping both sides of the conflict – granting each side buildings, resources, and even new citizens.”

These citizens will have ideas of their own, and with the use of your resources will do their very best to wipe out whichever enemy village is within pillaging distance. As a sort of fairy of friendly foreign policy, you’ll be tasked with knocking their heads together and ensuring that the fighting never gets so heated that one side doesn’t make it out.

“Unlike most strategy games, your goal isn’t to have either of the sides win,” explains Park. “You win by having the most points generated (read: most carnage) without either side committing genocide.”

It’s not as simple as taking back your charges’ pointy sticks, however – roaming bandits and local crime will make a standing military necessary for both sides. It’s then up to the player to combat their drones’ natural inclination toward bloodshed with embassies, diplomats and whatever else they can muster.

For more on the specifics, read Park’s blog.

It’s a god game, then, in which you play the mostly benevolent, theistic kind rather than the crazy old Ancient Greek sort endorsed by Molyneux. Does it sound like good fun to you?