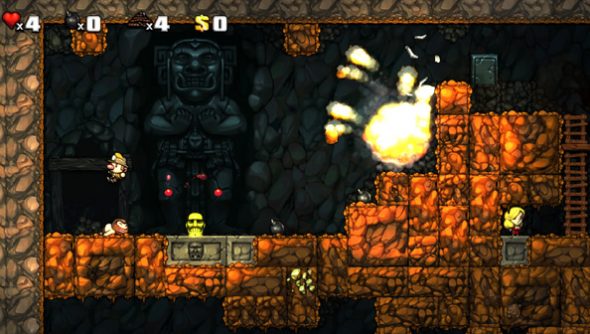 I once Spelunked for such a prolonged period that I witnessed a mouse, presuming I was fast asleep, running from one side of my bedroom to the other. That was 2010 and I’ve since, thankfully, moved – but Spelunky’s spruced-up, co-op enabled XBLA has yet to move to PC, where it surely belongs.

That’s until early August, when new, curvy Spelunky will supplant traditional, pointy Spelunky in our hearts and libraries, if we let it.

The XBLA version was first released in 2012, and the original free game long before that in 2009. Throughout its slow evolution, Spelunky has remained a roguelike platformer about cautiously descending through a (bottomless?) cave, taking care not to disturb gigantic spiders, offend well-armed shopkeepers, or sacrifice damsels to long-forgotten gods. Always gets me, that last one.

You’ll be able to purchase the new game via one of two reputable retailers, Steam and GOG, in less than a month’s time. Squeee, wouldn’t you say?