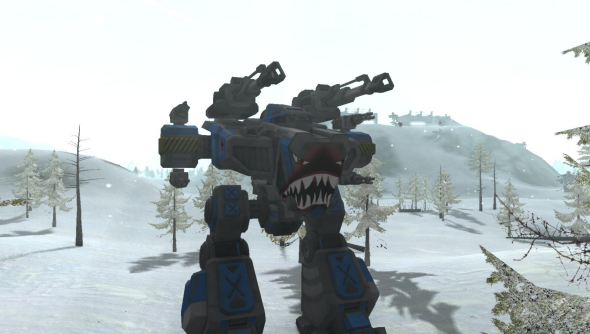 Another Saturday rolls around and so I give another spin of the Greenlight tombola, reaching inside to pluck out ten more games that are waiting nervously to be greenlit, clamouring to collect your mouse clicks. This week, I have nine promising titles and… and one that Jeremy forced me to include. You’d better look for yourself.

The third in a series of mech games which began with the 2005 IGF Finalst, Dark Horizons: Lore, this installment will feature a persistent online world through which players can sign up to different factions and stomp and shoot their way to victory (or defeat) though a variety of game modes. It’s up against tough competition, what with Hawken on the horizon, but since it’s been so long since PC gamers have been able to enjoy mech simulators I’m sure there’s room for more than one.

A platformer “about a man who deals with the troubles in life in an abstract and philosophical way,” Bliss could possibly be be a sumptuous and spellbinding game, or it could be a little bit pretentious, but we’ll just have to wait and see. The designer isn’t afraid to say that he’s been greatly influenced by both Braid and Limbo, two games which have definitely put a more thoughtful spin on platform gaming, so I’m willing to give this the benefit of the doubt. Also, it has flowers.

Cowboy vs Aliens vs Ninjas

Another Greenlight title looking to graduate from mobile gaming, this game puts you in the shoes (and the hat) of the Cowboy, demanding that you massacre hordes of enemies in a top-down action game that’s not a million miles removed from Cannon Fodder, though I’m pretty sure the body count is going to be higher. Game developers Dead Mushrom say they don’t plan to make their game a straight port and want to take advantage of your PC’s hardware.

Previously known as Slender: Source (due to copyright issues, apparently), this is another first-person survival horror game where your best weapons are your torch and your wits. What makes Faceless different to the increasing number of Amnesia-inspired “wave a light in the darkness” is its four person co-op, where players can work together to try to collect clues and find the answer to the terrible mystery they’re caught up in. However, it looks like it’s going to have to compete with…

The Orphanage boasts a couple of industry veterans amongst its members, including team members who were involved with L.A. Noire and Silent Hill. While Faceless has its own narrative, this game is able to draw on all the lore that has grown around the strange and scary Slenderman, which was born on the Something Awful forums and has spawned short stories, creepy photoshops, even a series of YouTube videos and, of course, now video games.

By itself, a top-down, almost Gauntlet-style action RPG would be quite enough to get my excitement gland pumping out endorphins, but the fact that 9th Dawn also procedurally generates its dungeons means I may actually have to go on medication. Just like Cowboy vs Aliens vs Ninjas, and an growing number of other Greenlight titles, 9th Dawn began life as a mobile game, but its developers plan to add extra features for the PC release, including the aformentioned dungeon generation and also a map editor.

Oh for heaven’s sake. I think what’ll happen with these Greenlight roundups every week is I’ll complain about indie developers using titles in ALL CAPS and then come across MORE GAMES that do it. Oh, the game? Well, it’s a fast-paced, top-down tactical shooter that calls to mind Syndicate as it pits armies made up of hundredssoldiers against one another, backing them up with a host of vehicles and equipment. It’s not quite clear to me how you manage all of these soldiers at once, but at this stage it all looks entertainingly chaotic.

No prizes for guessing which series this swashbuckling adventure game may have got some of its inspiration from. Pirates, voodoo priests and a cruel conspiracy come together in this very stylized story. Unlike many Greenlight titles, Ghost Pirates has already seen a limited release. Not heard of it? Many haven’t, hence why its developer, the German studio dtp entertainment, is hoping Steam will give it a much wider exposure.

One of dtp’s other Greenlight titles (they have a few), I’m not sure if Crash Time 5 is a driving simulator or a crashing simulator, since it’s so keen to show cars smashing into one another. Still, it’s not often we get to see a cops and robbers car chase game that gives you the chance to lay down spike strips or fire oil cannons. Crash Time 5 also offers a split screen mode that caters for up to four players, something PC gamers rarely get to try nowadays. That said, I struggle to fit even two people in front of my PC, so at least one person’s going to have to sit on my lap. That’ll probably be Jeremy.

Ah yes, Jeremy, it was he who insisted that I feature this game in the roundup. Usually I’m trying to pick out games that I think are interesting, that have potential and that are a little different. I can’t say that City Car Driving falls into the first two of these categories and I think it makes a rather unglamorous landing in the third.

It has perhaps the worst video possible associated with its Greenlight pitch, a video which, of course, begins autoplaying as soon as you visit the game’s page. The video shows the game, which was developed in Russia, being played by an American gamer who seems slightly baffled by its many differences. It’s not shit, he insists, and it does accurately simulate driving. Yes, I suppose that’s correct, insofar as it’s definitely a traffic congestion simulator, and we get to watch this fellow get stuck in traffic, complain about junctions without lights, turn his indictators on and off, curse other drivers and, while distracted, reverse into a bus. It’s a lot like getting into a real car with your dad.

I’ve included the video below because, well, because Jeremy made me do it. Enjoy your Saturday.