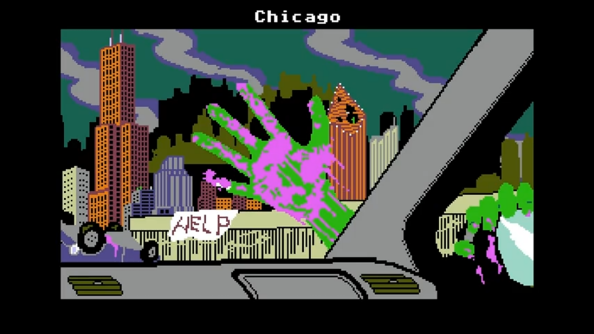 It’s that time again, and by “that time” I mean Saturday. That means I screw another bulb into our spotlight and highlight the best of Greenlight, bringing ten more games into the limelight. Oh, I have no dignity.

When I first saw Organ Trail I thought it was called Oregon Trail and that this would be a zombified version of the classic educational game. Fair enough, I said, it takes all sorts, but that’s not quite what this game is. Then, I watched what has to be one of the best trailers I’ve seen for a game in years. Are you ready?

So, you can “Name your party after your friends and watch them die slowly” and “Get dysentery and 9 other diseases,” while, I hope, also running into the odd bear. It looks like Organ Trail is a bunch of minigames tied together and so it reminds me of the sports games of old, where each event played differently. I don’t know about you, but I can’t wait to get dysentery.

Now this is an intriguing one. Manage your own automobile construction company from 1946 to 2020 and help to design not only the cars that you’ll be selling, but also their engine configurations. Do you want to squeeze a V12 inside a tiny two-door hatchback? You can give it a try. Do you want to make your money building the perfect family saloon, safe, practical and affordable? That can be your goal. Fancy building an ice cream van? I’m not sure you can do that.

Not a racing game, as you might first have thought, but a racing management game where the player takes control of a team of squirrels in “the dark underworld of the international squirrel racing scene.” The comfort and performance of your squirrels is obviously important, but will their success go to their heads? Honestly, I have no idea, since I have little experience with squirrels and I’m not sure what sort of attitudes they tend to display, particularly when competing at the highest levels.

International Racing Squirrels is already available for the iPad and was a finalist at both Indiecade and Develop. There’s a free version available to play online already, if you wan to get a feel for this dark underworld.

The board game Talisman has been around almost as long as I have, going through four (and a half) different editions during that time and establishing itself as a classic, if somewhat unpredictable, tabletop tussle. While many board games have been brought to tablets with the intention of making them more a portable and more manageable experience for a group of players, Talisman Prologue isn’t actually for groups at all. This is not a game to be shared, but instead a single-player spin on Talisman, an experience to be enjoyed alone.

Instead of pitting you against other players, the game sends you out on one of 50 quests that will see you battle your way around the board, fighting monsters and overcoming challenges. You still get to roll dice, draw cards and collect esoteric equipment, but I’m not so sure you can paint the miniatures.

This is a shrewd one. DLC Quest is a platformer where you have to unlock the game’s features and functionality by spending money. As you work your way towards the game’s “10 awardments to earn and make you feel reasonably satisfied with yourself,” you collect the in-game currency so that you can buy things like sound effects or the pause feature.

If the game sounds familiar, that’s because DLC Quest has on Xbox LIVE for over a year now, and won Official Xbox Magazine’s Indie Game of the Year back in 2011.

Ah yes, tanks. This is what we need, tanks and armoured cars. And we particularly need them to be white, yellow or bright blue. We want to battle with our tanks, we want to race with them and we want to go on missions or complete special challenges. We want our tanks to have legs, to have wings and, when we sit inside them, to enjoy some realistic physics. Gear Up is what we need. Why, it’s almost as colourful as…

This tower defense game is an eruption of neon and I wonder if the final game is going to make our monitors produce colours we didn’t even know existed. I’m not a big fan of tower defense, but Radiant Defense has already received a few nods for it’s iOS and Android incarnations and I have to grit my teeth and accept that some people out there may have different gaming tastes to mine. Grrr.

I’m
not so sure I like this whole capital letter thing that’s going on. I’m
the sensitive type and it looks just a little bit scary to me. That
said, I’d probably be pretty scared if I found myself FORCED, like the
characters in the game, so perhaps it’s appropriate. You see, FORCED is
all about being made to fight to entertain others.

Described by
its development team as Diablo meets Left 4 Dead, FORCED is about
players working together as they try to stay alive. You’ll choose and
frequently change your characters skills as you try to compliment your
teammates, as this is a game very much about making the best of the
abilities available to you.

Like a few of its Greenlight peers, FORCED has recently set up a Kickstarter campaign.

While we’re on the subject of Diablo, this
looks very much like it’s developing into a fast-paced action RPG
that’s unashamedly influenced by titles like Diablo and Torchlight. It’s all
about big weapons, bristling skill trees and hordes of monsters.
Akaneiro is influenced by Western fairy tales and Eastern mythology and,
with any luck, it’ll be entering closed beta in the next few days.

Oh good grief, are there not enough voxel-based building games yet? Well, that’s exactly what this is and just about all that I can say about it. Still, I do like that colour palette. It looks almost… Christmassy. How many shopping days are left, I wonder? I’d better go and write my list for this year. Ta ta for now. Do turn the light off when you’re done.