knew that One Finger Death Punch was for me when, in the game’s blurb, the developer wrote, “I often play the game with one hand while drinking a beer in the other.” How many fighting games can you say that of?

Mapping all its moves to the left and right mouse button you never find the game becoming too complex and its myriad of Kung Fu moves, boss battles, and slow motion, leave your brain’s awesome gland buzzing.

First, just how awesome will you look?

The core of how it works is that there are two hitboxes beside your character, one leading to the left, the other to the right. Once an enemy enters one of the boxes you hit the corresponding mouse button and you score a hit on the character. Some enemies are simple one hit kills, dispatched with a click of the mouse, others are more complex.

Blue stick men, for instance, take two hits but the first hit causes them to slide to your other side, requiring you to pull off a two hit combo to kill them. The first hit also stuns them for a moment so if you’ve more enemies lined up behind the blue you may need to hit them before turning to land your second attack.

There are also boss battles and elite fighters that require you to attack enemies with a Dance Dance Revolution style scroll of commands. When one of these enemies enters your hitbox the game enters slow motion and you’re presented with a list of left and right button presses. Click them all in the right order and within the short time limit and you’re treated to a ridiculously cool combo, often ending with you kicking the crown-wearing stickman through a string of plate glass windows. 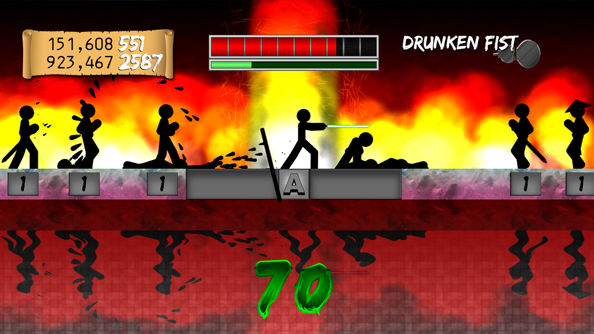 It’s not complicated but developer Silver Dollar Games have eked out as much fight variety as they can from their simple system. The brilliance of this is that you’re never going to be left behind by the learning curve but similarly you won’t be idly clicking the mouse. As you get further into the game you come across more enemy types, the game begins to speed up, and you unlock new skills (which activate more world-cracking combos). This all keeps the game fresh. The simple two-button control system belies what is a deep and satisfying fighter.

The key thing about the game, which you learn fast, is that you absolutely can’t button mash. A click when there’s no enemy will result in a miss, a miss leaves you temporarily immobile and open to attack. Button mashing will get you killed.

One Finger Death Punch, if you hadn’t guessed by now, isn’t a game that will change the world, push the medium forward, or evoke a spiritual change within yourself. It will make you smile, feel cool, and aid you in whiling away a sunny afternoon. Is that not enough reason to get it onto Steam? Try out the demo for yourself if you’re hesitating on giving it the big thumbs up.