Nine guys, fifteen months, zero publishers. That’s all it took to create Strike Vector and its breakneck combat. I don’t use ‘breakneck’ lightly either; this is a rapidly paced shooter where your weapon of choice is a transforming jet plane that refuses to operate at anything below Mach-1. It’s a physical, exhilarating experience: you’ll be tilting your head so often that you’ll give yourself neck-ache.

But that’s not enough. Beyond the perfectly crafted flight mechanics, Ragequit Corporation have delivered a rough, trite arena shooter that is a major disservice to its core idea. 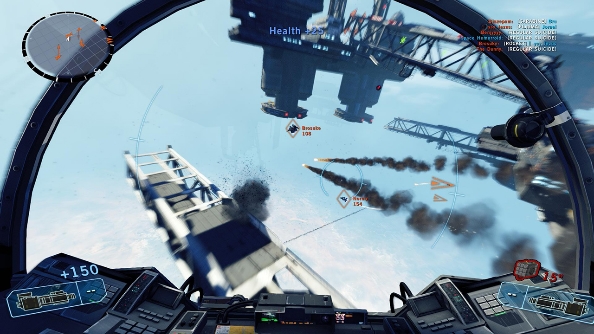 But let’s start with the good. Vector is Hawken: Sky Edition. Using the first person camera, you are encased in an industrial, hulking jet fighter that rattles as you squeeze the throttle. Arrows on your HUD relentlessly swing around the cockpit glass, pointing out allies, threats, and incoming missile locks. Yet rather than Hawken’s stompy walkers, Vectors are elegant fliers that weave in and out of derelict freighters and through the trenches of monstrous commercial emplacements.

They fly with ceaseless eagerness – even without the W key depressed your craft will soar forward. A quick snap of the space bar though will flick your engines vertical and bring you to an immediate stop, hovering and ready to fire like a portable turret. More than that though, it allows you to pull off incredible turn maneuvers to surprise chasing enemies. Simply slam on the brakes, turn, shoot, and flick back into jet mode to make your escape. Much more effective than all that loop the loop nonsense. 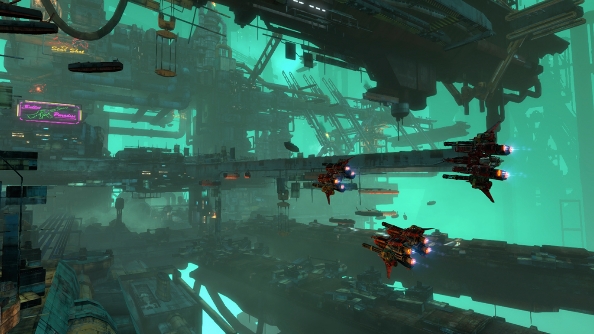 Piloting a Vector isn’t effortless though. The maps are full of busy tunnel networks, protruding struts, and narrow chasms that you have to weave through. Since your throttle is generally always fully open, it requires a great deal of concentration and skill to avoid environmental hazards as well as track enemies. Merely clipping a wing will send you into a spinning, flame-cloaked freefall. As cliched as it sounds, you really do have to become ‘at one with the machine’. Until then, it’s an acute uphill struggle to gain the confidence needed to thunder around the arenas.

When you have achieved Luke Skywalker-levels of flight ability, you’re still only half-way there. Sure you can track targets and escape pursuers, but actually killing them is part of another steep difficulty curve. Each match you’ll hopelessly switch between loadouts and perks. The game does nothing to educate you in the effectiveness and strategies behind each weapon, and when death comes as swiftly as it does in Strike Vector, it is exceptionally difficult to come to your own conclusion on what works for you. Once mastered though, keeping an enemy in your reticule and finally unloading your magazines into them feels like an genuine achievement. 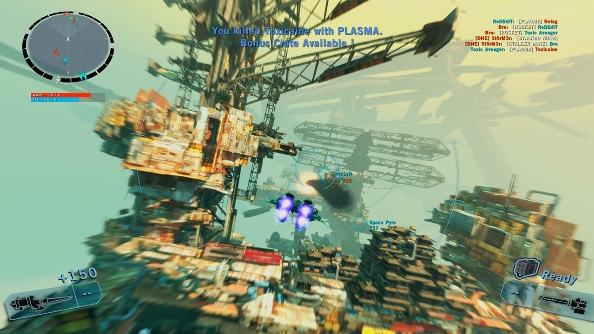 It’s an absolute travesty then that such remarkable combat is relegated to an arena shooter where the most inspired mode is Bounty Hunter, a game where you gain a higher price on your head the more enemies you kill, thus causing you to become everyone’s primary target. The three remaining modes are ‘90s heirlooms Deathmatch, Team Deathmatch, and Domination (an exceptionally basic capture point mode, which on some maps offers only a single area to hold onto). These modes offer enough for the learning pilot, but once you’ve mastered your Vector and the aims of the game become your core focus, the rust begins to corrode the hull. With nothing more than a few cosmetic changes to be unlocked through levelling up, you’re going to have to really love deathmatches to give any more of your time to Strike Vector after you’ve learnt all its flight thrills.

With no weapons upgrades to unlock, you’ll find the game’s entire arsenal in an outfitting screen prior to each respawn. Each ‘arm’ of your Vector can be outfitted with various dispensers of artillery, and tweaked with two upgrades to adjust stats like accuracy and range. On offer are a collection of eight meaty shooters, from the dependable gattling gun to a multiple-homing-rocket-launcher. Similarly a collection of perks and gadgets are also fully available to you from minute one. It’s certainly an old-school method of play, but in a world of shooters filled with unlocks it feels like there’s nothing to achieve or progress towards. 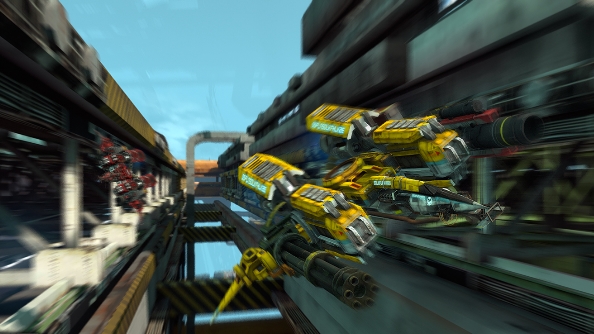 It’s also covered in rough edges: from the menu on down. A nine-page tutorial explains the basics of the game with all the elegance of a fifth-grader’s powerpoint presentation, spelling mistakes and all. Text leaks out of pre-defined boxes leaving names for weapons and skills half displayed. It’s a poor first impression, but luckily you don’t have to spent much time here.

Strike Vector deserves more. It deserves a selection of inspired game modes. It deserves a collection of well-balanced, strategic weapon unlocks. It deserves a flight school that’s more than picture boxes and poor spelling. Because underneath that wrapper of disappointments is a phenomenally cool, brilliantly built game that excites, thrills, and challenges. You won’t regret your time spent in Strike Vector’s lead-and-gunpowder filled skies, but it won’t be long before you’re seeking thrills elsewhere.