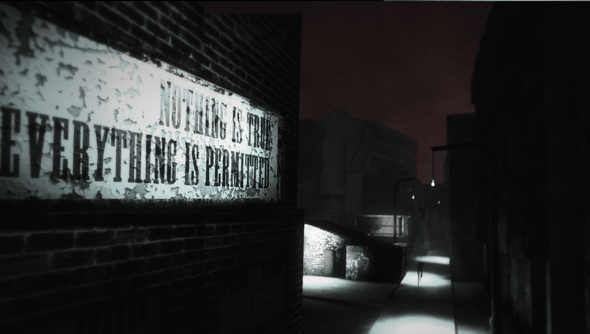 While it carries the influences of games like Dishonored on its sleeves, with much of your time spent skulking in the shadows and stabbing people in the gizzards, where Tangiers departs from the beaten path is being set in a world which will physically alter itself in light of how you play.

If you go through a level slicing all and sundry then later levels will be rebuilt to exacerbate the trial of a violent playthrough; tearing challenging elements from previous levels and stitching them into the fabric of the later ones.

What Andalusian have managed to create with their dark surrealist art style is the sense the world could crack and break apart at any moment, the buildings look part of the world but only loosely fitted to the ground.

It’s all been designed to get the player comfortable with author William S. Burroughs’ cut up technique which is shot through the game’s development. “The cut-up technique is something that’s been very influential on me creatively,” designer Alex Harvey told, “but inclusion in Tangiers was subject to a… creative block for much of early development.”

Burroughs’ practice of cutting up chunks of different texts and organising them on the page to create a new story was the spark needed to overcome the block in development.

“You play a weakened being recently arrived in a strange world,” Harvey reveals. Your actions are “disrupting the fragile reality of a world you’re not part of”. The world of Tangiers will be torn apart and crassly stitched back together around your actions. 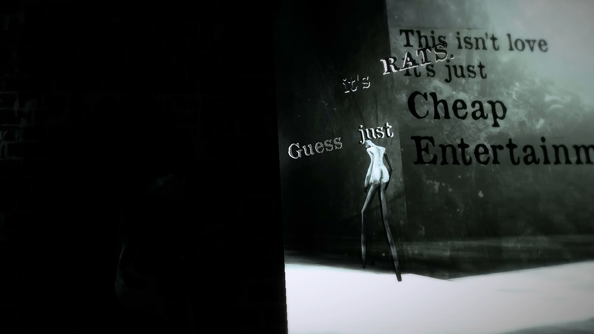 “[O]ne area revolves around some docks, featuring the obligatory lighthouse,” Harvey continues. “Careless play through will cause [the] lighthouse to be embedded in the architecture of a future level (levels can be completed in any order). Now, depending on the magnitude of your interaction in the docks (did you go around back stabbing and killing everyone?) the lighthouse will appear at harsher angles – it’s rotating light going on to illuminate not just the rooftops, but to illuminating the streets you’re trying to infiltrate through, providing an additional hazard to avoid.”

This system for repurposing the world isn’t determined by simple yes/no values, though. “The exact position of the lighthouse, and the angle that it tilts at (and the level you see it in), are all flexible, seeded from what you did, [and] where you did it.” This should give each level a more organic sense than mechanical.

“[N]one of the levels are designed as puzzles or a-b challenges, more living areas with problematic hotspots in them. The use of our cut-up serves to introduce problems or exacerbate existing ones.”

Oh, and your tools in Tangier? Use “discarded conversations, hurling words down the street to distract your enemies, to give you a split second to slip past.” Awesome.

Andalusian are aiming to release Tangiers in the middle of 2014.