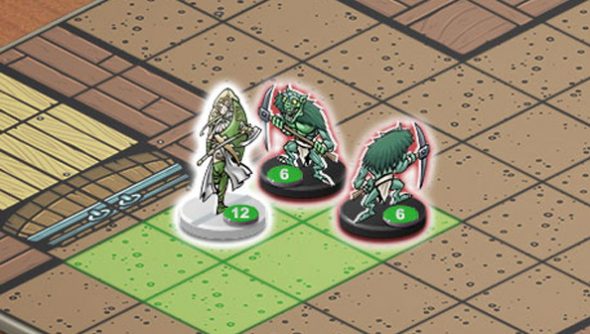 Card Hunter is the indie turn-based tactics debut from Irrational co-founder Jonathan Chey and his studio, Blu Manchu. If you’re anything like me, those words will have your face lit up like a Greek comedy mask.

It’s also a free-to-play, browser-based CCG. Tragedy. Or perhaps not. If you’ll allow me, I’d like to explain precisely why those latter three things won’t ruin 2013’s best game, but rather lift it above the rabble of new releases like a bloody great balloon.

Free-to-play. More like pay-to-win, amirite? No. I am not right.

Mo’ money will allow you to progress through Card Hunter faster or while wearing a prettier cape cape, but will not offer you a higher chance of victory. Here’s Blu Manchu’s Jonathan Chey, who’ll give you a better idea of what to expect.

“The cards are won by playing the single player game. You don’t have to sit down and buy 20 boosters and hope you’ve got some good cards – you’ve acquired this collection by playing.

“Obviously there are things to pay for in the game. Things that accelerate your collection of items or give you cosmetic improvements. Some of the game content you can pay for. But essentially you don’t have to pay for the game if you don’t want to. We fall in the philosophy of, you can put time into the game, or if you’re really short on time you can pay to accelerate certain things.” Oh, yuck. Card Hunter refuses to push my graphics card, instead plumping for a uniquely brilliant aesthetic that riffs off first-edition D&D artwork. Why’s that?

“I honestly care less and less about the format games come in these days. I’m finding it harder to tell the difference. And the things I care about – and I think this is true for most gamers too – it increasingly less matters what kind of graphics card you have in your PC, or whether it’s using DirectX or OpenGL or whatever library. I’ve stopped caring for a long time now.” Card Hunter is a turn-based tactics game and about half an RPG, but behind that are the intricate, compulsive workings of a Collectible Card Game a la Magic: The Gathering. For those whose CCG experience began and ended with the (excellent) Pokemon Trading Card Game on Gameboy Colour, however, that fact might be more than a little intimidating.

Blu Manchu believe they’ve overcome some of the genre’s biggest fun-hurdles, however.

“If you want to play Magic online, leaving aside the financial issues, if you want to put together a deck you have to rifle through hundreds of cards and you’ve got all these complicated issues: how much mana should I have, what percentage of lands should be in my deck and what’s my mana curve,” says Chey.

“All these really quite technical aspects. If you don’t pay attention to that stuff you can’t be competitive, and there’s nothing to do in that game but play other people. I definitely understand that and was really careful to design a game that would skirt around those issues.” Crucially, Blu Manchu have built Card Hunter around its single player experience, and playing against a computer is “much less intimidating”.

“The AI is designed to make your play experience fun, to put you on a curve of increasing difficulty and introduce concepts gradually”, says Chey. “So we can structure Card Hunter like a typical game, which doesn’t throw this whole thing at you and say, ‘figure this out’.”

What’s more, Card Hunter’s developers have simplified the process of deck-building to “keep the top end complexity without the huge learning curve”. Rather cleverly, they’ve backgrounded the cards in favour of a conventional RPG-style paper doll dress-up system. It works thusly:

So it’s nothing to be concerned about. In fact, Blu Manchu hope that players new to CCGs will appreciate the extra strategic meta layer deck-building brings to the game.

“The other thing is that by the time you’ve finished the single player campaign you’ve already built a deck,” concludes Chey. “You’ve equipped these characters, you’ve grown them, you’ve seen the cards, you know what they do. So hopefully if you want to transition into the competitive multiplayer part of the game you’ll have a very good understanding of that.”