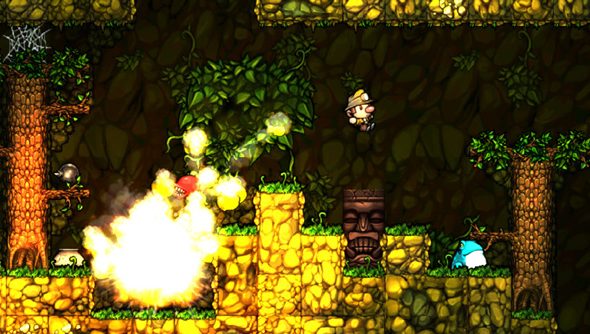 The enslickened Xbox 360 version of beloved rogue-like platformer Spelunky is being ported back to PC, so says a triumphant post on the game’s official website. The graphically improved Xbox version was released in 2012, following the original (and still free) version’s release in 2009.

Beyond the HD varnish, the underlying game itself remains near enough identical in both PC and Xbox guises, as you descend through levels using tools, whips, ropes and careful subterranean navigation, rescuing damsels, avoiding enemies, dodging boulders and swiping artifacts along the way. It’s teeth-grittingly difficult adventuring in which procedurally generated levels ensure that you’ll see variety in every single playthrough. There are times when, in anger, you will claim to hate Spelunky. But deep down you know that it will always have a place in your heart. It’s genuinely one of the best indie games around, and the free version will remain so even after the premium version is launched.

Spelunky HD on PC will join the release of the PlayStation 3 and Vita versions some time this summer, suggesting that a stonker of a year-long Microsoft exclusivity agreement has just lifted. The glammed up reboot will be available on Steam and GOG before arriving on the Humble Store shortly after.